Conflict between whites and American Indians occurred throughout the mid-1800s, when trail travel peaked. But the Indian Wars sputtered on into the 20thcentury, with occasional skirmishes across the West. In Converse County, Wyo., a 1903 confrontation over hunting rights ended with the deaths of seven people. A U.S. Senate investigation followed.  This month, we bring you that story.

And since our work at WyoHistory.org slows in the summertime, we thought offering some past articles would give deeper context to the 1903 fight on Lightning Creek. One is the story of how a pregnant Lakota woman stopped a wagon-train attack. The second includes the story how their mutual sorrow over the death of a young girl made possible a brief peace between white and Brule Lakota people.

A fight on Lightning Creek

When a party of Lakota Sioux raiders attacked a small wagon train of Shoshone, white and mixed-race people in 1868, eight-months-pregnant Woman Dress Lamoreaux stopped the skirmish when she climbed from a wagon and threatened the attackers with drastic consequences from her brother, Gall—their war chief—if they continued the fight. Read more in Rebecca Hein’s article, “Three Mixed-race Families and a Wagon Train Attack: A Story of Frontier Survival.”

The death of Spotted Tail’s daughter

In March 1866, when people at Fort Laramie mourned the death of Mni Akuwin, daughter of Spotted Tail, chief of the Brule Lakota, a colonel at the post hoped it was a sign of peace between the white and Indian people. Hopes were shattered later that spring however, by the arrival of hundreds of troops to build forts on the Bozeman Trail. Two more years of bitter warfare followed. Finally in 1868, the tribes of the northern plains signed a treaty ending the war—for a while. Read more at WyoHistory.org Editor Tom Rea’s article, “Peace, War, Land and a Funeral: The Fort Laramie Treaty of 1868.” 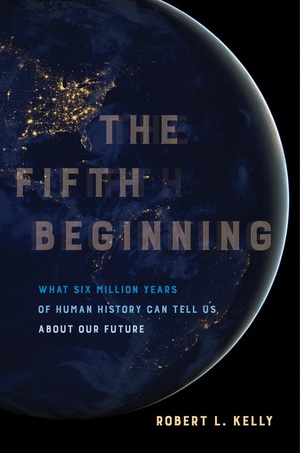 The Fifth Beginning by Robert L. Kelly, 149 pages, Hardcover $24.95; eBook, $24.95. University of California Press, 2016.Though his book is slim, University of Wyoming Anthropology Professor Kelly covers heavyweight, thought-provoking material. In easily understandable prose sprinkled with modern day comparisons and displaying a keen sense of humor, he posits the theory that humans are entering into a new archaeological beginning. During this beginning, he says, humans will have the “capacity to change the world,” and that they can draw upon history for guidance, two factors that distinguish this era from prior ones.  Kelly explores the four previous beginnings in human history from the stone age to state society, thus the book’s subtitle: What Six Million Years of Human History Can Tell Us about Our Future. He refers to these beginnings as: technology, culture, agriculture and the state, and he also shares his optimistic view that this “fifth beginning” could signal greater global cooperation among people and perhaps mark the end of wars. The book is available at local bookstores and online as well as directly from the publisher at https://www.ucpress.edu/book/9780520293120/the-fifth-beginning.

Everyone is welcome. Youth age 12 and up are invited (and will be admitted free) to participate in outdoor and indoor activities. Registration for adults is only $25. PTSB and UW credit available. Lunch provided both days. A golf scramble will be held Aug. 7 at 2 p.m. To register and to learn more about the presenters and the conference events visit the conference website.

Wyoming State Historical Society Annual Meeting in Douglas, Wyo., Sept. 7-9, 2018
Make plans now to attend the 65th annual meeting of the Wyoming State Historical Society in Douglas, Wyo., Sept. 7-9, 2018. Registration fee for the entire weekend is $80 per person for members or $90 per person for non-members. Rates are different for couples and students. Fee includes treks and tours, membership meeting, awards luncheon and workshops. Deadline for registration is Aug. 29, 2018. The fee is payable to the Converse County Historical Society. For more information visit the Converse County Historical Society’s Facebook page at https://m.facebook.com/conversecohistoricalsociety/or contact Heidi McCullough at (307) 359-0608 or heidiho2202@yahoo.com.