The First Wyoming: What's in a name?

The First Wyoming: What's in a name?

Delightful Wyoming! beneath thy skies,
The happy shepherd swains had nought to do
​But feed their flocks on green declivities,
Or skim perchance thy lake with light canoe,
From morn till evening's sweeter pastimes grew,
With timbrel, when beneath the forests brown,
Thy lovely maidens would the dance renew;
And aye those sunny mountains half-way down|
Would echo flageolet from some romantic town.

I didn’t write this. A British poet named Thomas Campbell did—in 1809. It’s a stanza from his epic poem entitled “Gertrude of Wyoming,” a work much acclaimed in the early 19th century. So what is he talking about? Certainly not the Wyoming we know, because our Wyoming existed as neither territory nor state in 1809. And if it’s not the Wyoming we know, just what does it mean to be a Wyomingite? Therein lies a story.

Would echo flageolet from some romantic town.

I don’t know the meaning of “flageolet” and neither does my thesaurus.

The Wyoming that Campbell described is a verdant valley bisected by the Susquehanna River in what is now northeastern Pennsylvania. In the mid 1700’s, the colony of Connecticut claimed it, citing a conveyance by King James the First under the great seal of England dated November 3, 1620. At the same time, the Six Nations Indian tribes—the Iroquois—claimed they owned the Wyoming valley, though it was mostly occupied by Delaware and other peoples pushed out of other places, who were sometimes allies of the Iroquois, and sometimes not.

​At a treaty at Albany, New York in 1754, the Wyoming valley was purchased from the Iroquois by a company of Connecticut people, many originating from the town of Wallingford, where I grew up. The fact that the Delaware and other tribes who actually lived in the valley had no say in the deal would create serious problems later. Meanwhile, the Susquehanna Company, as it was called, was quick to promote the valley as follows:

Here is nature of unconcealed loveliness. The magnificent forests, the luxuriant fertility of the soil and climate give promise of golden harvests and pleasant homes as the rewards of industry and enterprise. Game of every sort is abundant. The quail whistle in the meadow; the pheasant rustle in its leafy covert; the wild duck rear in every inlet; the red deer feed upon the hills; and within the forest are found stately elk.

The onset of the French and Indian War delayed settlement, so it wasn’t until 1763 that a number of Connecticut emigrants visited the Wyoming valley to clear land and sow grain. Their crops proved abundant. But on October 15th the following year a large party of Indians assaulted the settlement and killed about 20 men, the women and children fleeing to the mountains and eventually making their way back to Connecticut. 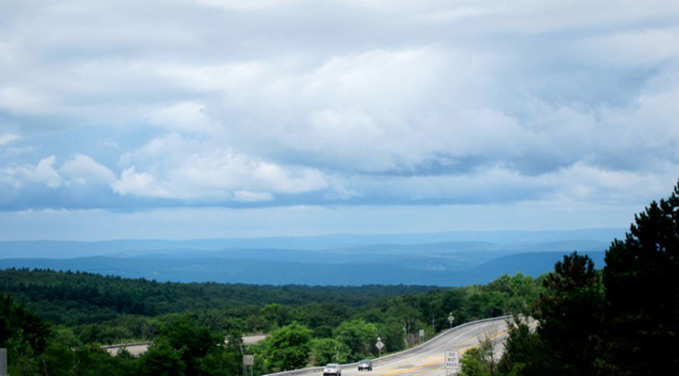 Five years later the Susquehanna Company decided to try again and raised two hundred pounds, an enormous sum in today’s currency, to equip another wave of settlers. By the end of 1768, 200 able bodied men had left their homes in Connecticut for Wyoming, and by 1775 the Wyoming colony had become so numerous that it was taken under protection of the Connecticut militia. As one historian wrote 100 years later, “Wyoming was a part of Connecticut. Her sons were there with their good English names, shrewd sense, unostentatious home-bred tastes, habits of economy, schools, religion, laws, industry and valor.” Sounds like an 18th century version of cowboy ethics.

Regrettably, events overtook the Wyoming colony. Many settlers left to join the Continental Army, leaving the valley weak and unguarded. On July 3, 1778 a combined force of British, Tories and Seneca and Cayuga warriors attacked and killed 160 Connecticut men, or more than half the able bodied men in the valley. Following the end of hostilities, a few families eventually returned to the Wyoming valley, but in 1782 the Decree of Trenton conveyed the area to Pennsylvania, negating Connecticut’s claim.

On Susquehanna's side, fair Wyoming!
Although the wild-flower on thy ruin'd wall,
And roofless homes, a sad remembrance bring,
Of what thy gentle people did befall;
Yet thou wert once the loveliest land of all.

Depending on who you talk with, the word “Wyoming” in Delaware Indian language means either "large plains" or “mountains and valleys alternating;” in Munsee language "at the big river flat;” or in Algonquin “a large prairie place.”

Regarding the state we call home, U.S. Representative James M. Ashley of Ohio proposed the name “Wyoming Territory” in 1865, having been born in Pennsylvania and familiar with the Wyoming Valley. Later, after coming west to visit the territory, Ashley had second thoughts about naming our land “Wyoming,” stating that “…there was not enough fertility in the soil to subsist a population sufficient for a single congressional district. Not one acre in a thousand can be irrigated.” Nevertheless, our name stuck.

As we all know, the ability to serve Wyoming as an elected official often depends on the amount of Wyoming heritage a candidate can claim. I grew up in Wallingford, Connecticut and many of my ancestors settled in the Wyoming Valley. This makes me a 10th-generation Wyomingite and therefore at least twice as qualified to serve our great state as anyone else.

But I’ve decided not to run for office. I’ll leave that to the newcomers.

Jim Brown grew up in Connecticut and holds degrees from Williams College and the University of Southern California, where in 1968 he received a Ph.D. in geology. He joined Conoco as an exploration geologist and worked in Alaska, Colombia, California, Oklahoma City and Denver before transferring to Casper in 1979, where his sons Andrew and Matthew started school. In 1982 he took a Casper College course in Wyoming history, taught by the great storyteller Bill Bragg. Jim transferred overseas in 1984 and returned to Casper 15 years later following exile in London, Scotland, Texas and Oklahoma. He is now retired but maintains an office outside the home to the relief of his wife, Karen. He maintains an interest in Wyoming history, having for the past eight years volunteered in various efforts to locate the site of the Battle of Red Buttes (July 26,1865) west of Casper.

how wyoming got its name
naming wyoming
wyoming name