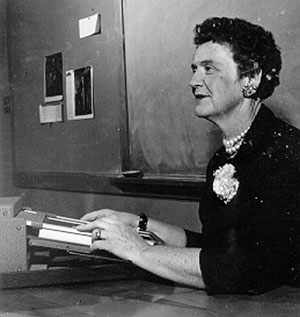 Verda James was the first woman to serve a full term as speaker of the Wyoming House of Representatives, serving in that capacity during the 1969-1970 session.

She was born in Stratford, Ontario, Canada, on Sept. 27, 1901, to William Henry and Sara (Nice) James. William Henry James was a railroad official. The family moved to Iowa when she was two years old. She graduated from high school in Boone, Iowa, and received her undergraduate degree from the University of Iowa. She became a teacher, working first in Algona, Iowa, and later in Casper, Wyo., where she taught English at Natrona County High School.

In 1939, she began working for the Wyoming Department of Education, eventually becoming director of the Special Education Division. She also served as the state’s deputy director of public instruction.

In the early 1950s, she was instrumental in creating remedial reading programs, and in 1955, she joined the Casper College faculty, teaching English and education. In 1958, she became assistant superintendent for elementary education for Natrona County School District 1.

She belonged to numerous professional and community organizations and strongly believed that women, no matter their background or education, could and should play an active role in their communities. One of her proudest accomplishments was her role in the Wyoming Department of Education’s establishment of the state School for the Deaf in Casper.

Verda served eight terms, from 1954 to 1970, in the Wyoming House of Representatives. She chaired the House Education Committee for three terms and was the only Republican woman in the House during most of that time. Wyoming Governor Clifford Hansen appointed her to the Governor’s Committee on Education and the Status of Women. Verda once summed up her career as an educator and legislator, saying, “If I can do something to help the children, I will have fulfilled my job.”

Verda James Elementary School in Casper, built in 1978, was named to honor her for her outstanding accomplishments.

James was not the first woman ever to hold the position of House speaker in Wyoming, however. That honor belongs to Edness Kimball Wilkins. Wilkins, a Democrat, was serving as majority leader in the House when Speaker Walter Phelan of Cheyenne died in office. After Phelan’s death, Wilkins’ fellow House Democrats promoted her to speaker in May 1966. But she ran successfully for the state Senate the following fall, and so never actually served as speaker during a session of the legislature. The Wyoming Legislature at that time met only on odd-numbered years.

Verda James, of Casper, first woman speaker of Wyoming House of Representatives, dies at the age of 90.

The LSO has commissioned narratives to accompany the composite, session-by-session photographs of the members of the Wyoming Legislature, which hang in the chambers and hallways of the State Capitol. The narratives give brief biographies of a few legislators of interest, along with a compact, decade-by-decade look at the principal issues facing all the lawmakers since Wyoming became a territory.
Website