John Vandel was a junior pharmacy major at the University of Wyoming when he and his Sigma Nu brothers received a phone call from United Airlines. 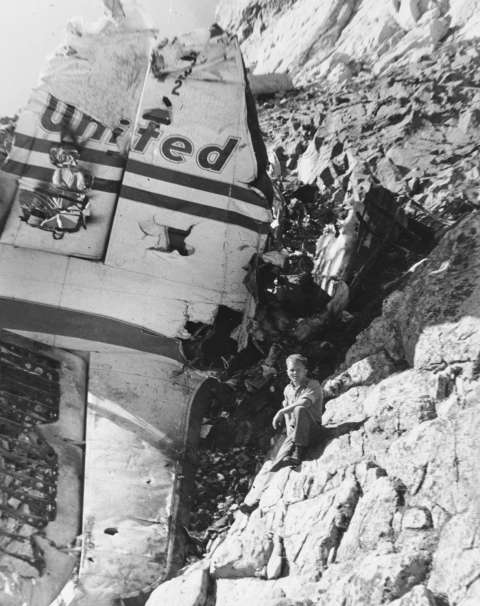 Flight 409 crashed into the east side of Medicine Bow Peak just 24 hours earlier.

“The guy that called us had been in our fraternity years before,” Vandel said. “So, he called our fraternity and said, ‘If you get some guys up there, we’re going to pay you pretty well.’ So, all the guys volunteered.”

People were needed to remove the bodies of the 66 people aboard the plane, and Vandel agreed to help.

“It was all curiosity,” he said. “We got to go up and see what it was all about.”

He didn’t know the crash, 40 miles west of Laramie, Wyo., where the university is located, was at the time the worst air disaster in United States history.

Sixty-three passengers and three crew members sat in the DC-4 aircraft, a four-engine propeller airplane, as it left Denver’s Stapleton International Airport the morning of Oct. 6, 1955, with plans to land in Salt Lake City less than three hours later, according to United Airlines documents, one of many documents about the crash stored in the archives at the university’s American Heritage Center.

Among the 66 people aboard were members of the U.S. military, choir members from Salt Lake City and two infants.

The normal flight path goes far north of Laramie to skirt the Snowy Range. However, a United Airlines investigation after the crash concluded pilots would occasionally fly over Medicine Bow Peak, the range’s high point, to save time.

Windy weather as reported over the Snowies the night before the crash, along with possible snowfall — less than ideal flying conditions.

When flight 409 failed to report in to Rock River, Wyo., 40 miles north of Laramie, fighter jets from the Wyoming Air National Guard were scrambled with orders to find a missing aircraft.

The plane crashed at 7:26 a.m., according to onboard clocks recovered after the crash, the investigation report states. It exploded on impact, creating a debris field about a mile long. Two huge black marks scorched the side of the mountain.

Wreckage and bodies were catapulted over the precipice — the plane impacted only 25 feet below the mountain crest. The tail section broke off and lodged itself on a small outcropping halfway down the cliff. The rest of the wreckage tumbled down snowy rocks, coming to rest at the foot of the peak.

The crash was discovered by an F-80 fighter jet based out of Cheyenne at 11:40 a.m. the day of the crash. The pilot spotted “a huge black smudge where it hit the peak and pieces of wreckage that slid 200 feet down the side of the precipice,” an Oct. 6, 1955, Laramie Boomerang article states.

With bad weather still engulfing the crash site, the jets were ordered back to base before more surveillance could be completed.

Bob Foster, a Civil Air Patrol member from Laramie, was the first person to reach the crash site. He recounted his experience during a 1996 interview for the American Heritage Center.

“As we walked along the tail slope of the mountain, we started to run into the wreckage, landing gears and main struts of the wing. And then you look to where we saw the plane crash and you see those airplane parts quarter of a mile away, it’s obviously going to be a really bad scene. You don’t really expect to find any live people.”

Personnel began arriving soon after the crash was discovered — a group of 14 rescue workers from the Denver operating base of United Airlines arrived by plane at 2 p.m. Thursday.

The timing of the disaster couldn’t have been worse — more than 1,500 Shriners packed the hotels of Laramie at the time for a convention, leaving almost no place to house the scores of United Airlines personnel streaming into the area, an Oct. 7, 1955, Boomerang article states.

Double cots from the university were brought to the Connor Hotel. Some Shriners also gave up their rooms for emergency workers and airline personnel. More than 125 people were at the crash site by Thursday night. 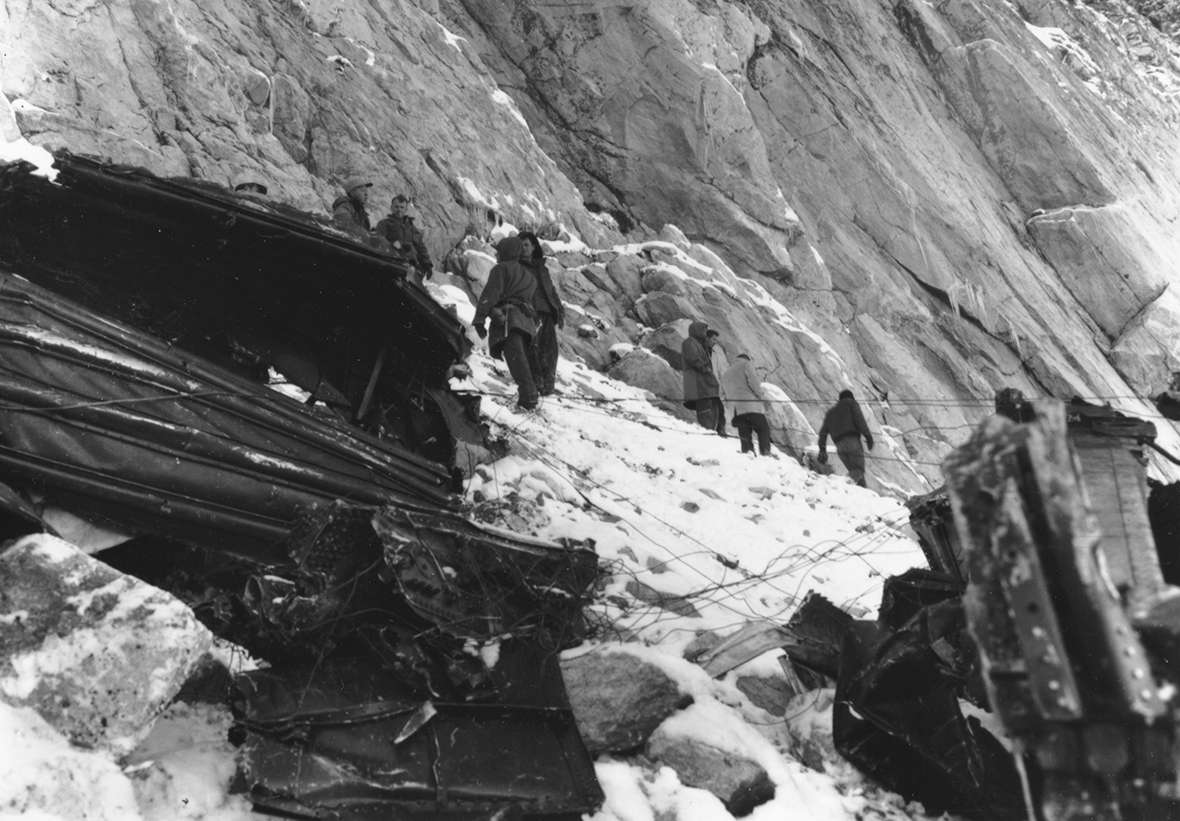 Only the best mountaineers could reach the peak where a majority of the wreckage was scattered — many of the trails and paths available today did not exist in 1955.

Dr. John Bunch made the climb with airline officials, local law enforcement and reporters to the base of the cliffs above Mirror Lake to treat any potential survivors, an Oct. 7, 1955, Boomerang article states.

The state of the bodies was such that they could only “be identified only by fingerprints,” he told the Boomerang.

The explosion showered the area with wreckage workers had to avoid.

Body bags were brought to the crash site to transport the dead to the bottom of the cliff. A rope-and-pulley system about 900 feet long was created, running from the top of the cliff to the base of the mountain, UW Outing Club member Richard W. Murphy says in a report.

Vandel and his fraternity brothers arrived later that Friday, after the system was set up. He worked the lower end of the pulley system.

“We got a call early that morning and we all skipped class and went up there,” he said. “The university excused us.”

About 30 people were helping in the area, Vandel estimated, although he didn’t know how many others worked at the peak or in the identification room. 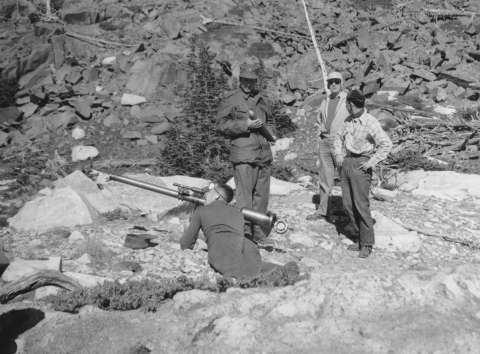 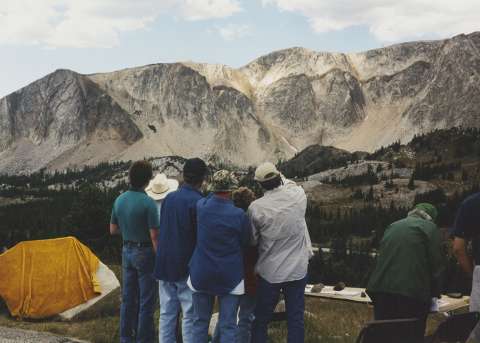 The UW summer science camp — a group of log cabins not far from the site — served as a temporary morgue.

“They did all of their identifying in there, and we weren’t allowed in there,” he said. “In fact, nobody wanted to go in there.”

All of the victims were in bags by the time Vandel and his fraternity brothers received them at the base of the mountain — with some bags labeled “spare parts.” The group avoided some of the traumatic sights others higher up the mountain saw.

“We were all kind of having fun and joking around in between trips, but it was serious business,” he said.

Murphy’s 1955 report states it took 20 minutes for 10 men to haul the pulley to the top of the mountain — it was “exceedingly hard work.”

The entire process was run under United Airlines control.

“It was pretty well organized,” Vandel said. “They had us assigned to different things and showed us what to do.”

Aftermath and the investigation

Fifty-seven victims had been recovered from the mountain by the afternoon of the following Monday, a spokesperson from United Airlines stated in the Oct. 10 Boomerang. He estimated 125 people were still working at the site.

By that Tuesday, all victims had been recovered and identified.

While the victims had been removed from the site, wreckage from the large four-engine airplane was still strewn about, from pistons and wing struts to landing gear and propellers. However, the entire tail section of the plane was still lodged precariously in the mountain face hundreds of feet above the ground.

It was decided the wreckage needed to be destroyed to discourage curious climbers. The solution was to shoot the tail down with a recoilless rifle —a small artillery piece — Don Sims said in a 1996 American Heritage Center interview.

“They didn’t want to leave it there because there were so many people crawling around in there,” he said. “Do you think that thing would come down? Oh no — it took hit after hit.”

Eventually, the wreckage was dispersed, but many pieces of the plane litter the mountain base to this day.

The U.S. Civil Aeronautics Board announced the day after the crash a “thorough and detailed investigation” would determine the cause of the “worst commercial airplane disaster,” an Oct. 7, 1955 Boomerang article states.

Several theories formed about what caused the crash, but none were confirmed.

Three local loggers were working at a site about 10 miles southeast of the crash, and one told the board the right inboard motor of the DC-4 was not rotating, possibly indicating some sort of mechanical failure.

The loggers also estimated the plane was at about 10,000 feet — the plane was about 300 feet above the treetops and the camp’s elevation was 9,600 feet.

Board members said this was “dangerously low,” especially for an unpressurized aircraft — passengers would begin to feel ill effects at that altitude.

Throughout the investigation, United Airlines managers in Denver and Salt Lake City said the pilot, Capt. Clinton C. Cooke, Jr., and his first officer Ralph D. Salisburg, Jr., were good pilots with a perfect record. Cooke had flown the route 45 times in the previous year, a Civil Aeronautics Board Accident Investigation Report states, and had never been known to deviate from the flight plan without telling a dispatcher.

However, it is almost certain the pilots purposely went out of their way to fly over the mountains, the report states.

“It is difficult to understand how a pilot of Capt. Cooke’s experience would deliberately attempt a shortcut and, even if he did, why he would have flown at such a low altitude over hazardous terrain,” it states. “It is true the flight was an hour and 11 minutes late; however, the time saved by taking a shortcut would have been inconsequential.”

It goes on to state deviating from the course “would have been breaking rigid company rules and his record indicated that he had never been known to do so.”

Carbon monoxide poisoning leading to crew incapacitation was also listed as a possible — albeit unlikely — cause.

Today, hikers and climbers near Medicine Bow Peak can view pieces of the wreckage, although the black scars on the cliff face faded long ago.

Vandel kept a piece of wreckage for many years, he said, and still occasionally thinks about the crash today.

“I kept on wondering, over the years, how the devil they did it,” he said. “How did he happen to just run into a mountain?”

(Editor’s note: This article was first published in the Laramie Boomerang Oct. 4, 2015 and is republished here by special permission. Used with thanks.)

Thaddeus Mast is a graduate of Iowa State University and a reporter on the Laramie Boomerang. He moved to Wyoming in 2014.

In 2001, a privately funded plaque memorializing the victims of the 1955 crash of United Airlines Flight 409 was erected at the Miner’s Camp turnout on Wyoming Highway 130 between Centennial and Saratoga, just west of Snowy Range Pass. The inscription on the plaque reads, “In memory of the 66 passengers and crew that perished on Medicine Bow Peak October 6, 1955.” Viewers of the plaque face a spot on Medicine Bow Peak slightly south of where the plane met the mountain. There are no trails to the crash site. Highway 130 is closed in winter.