A celebrity might have a brief career, or be famous for decades, even living on in public memory after death. But has an infant ever achieved this status?

The Pedro Mountain Mummy was discovered in June 1934 by two gold prospectors in the Pedro Mountains approximately 60 miles southwest of Casper, Wyo. Contrary to the mythology of the nearly eight decades that have passed since its discovery, the mummy was almost certainly a human baby, not a tiny adult from the Pliocene Epoch or from the race of Little People of American Indian lore. 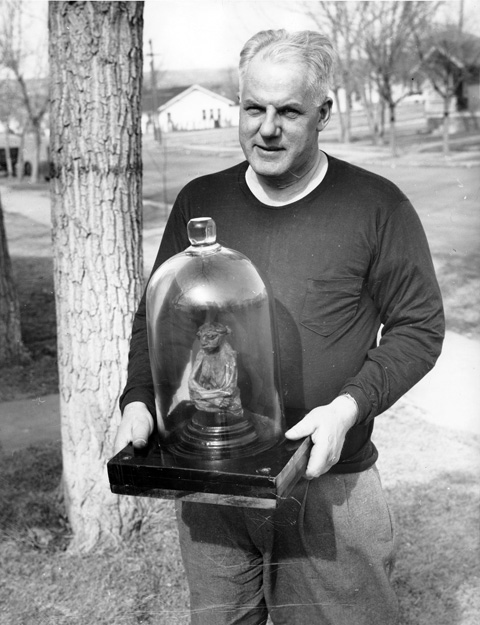 Photographs and a signed affidavit leave little doubt that the discovery itself was real. The affidavit, dated Nov. 13, 1936 and signed by Cecil Main, one of the prospectors, states that the mummy was "found in a sealed cave, on a rock ledge about two and one half feet from the ground…there was nothing else in the cave." The affidavit further states that the mummy was "now owned by Homer F. Sherrill, and located in the Field Museum in Chicago, Illinois." The affidavit was sworn in Scotts Bluff County, Neb., and subsequently recorded in Hot Springs County, Wyo., on Aug. 16, 1943.

From the time of its discovery until it was lost in 1950, the mummy traveled a path that will probably never be possible to document fully. An article by Penelope Purdy in the Casper Star-Tribune dated July 21, 1979, states that the two prospectors "took the mummy back to Casper with them as a curiosity. Although they were ridiculed for perpetrating a hoax, the body made the rounds of local sideshows in a glass bottle. . . ."

Lou Musser wrote in a March 30, 1950, article for the Casper Tribune-Herald that the mummy for years “has been the center of much controversy locally." Musser notes that before it was purchased by Ivan Goodman, a Casper businessman, it was displayed by a prior owner in the Jones Drugstore in Meeteetse, Wyo. Although Musser does not name either the Meeteetse owner's name nor the price Goodman paid, Purdy mentions a selling price of "several thousand dollars." In a related article dated July 24, 1979, Purdy names the Meeteetse owner, Floyd Jones.

If the affidavit was dated in the same year as the discovery, both Purdy's 1979 article, as well as Musser's from 1950, have errors. Purdy states that the mummy was found in October 1932, according to "local legend." Musser reports that a sheepherder discovered it, naming no date.

To further confuse matters, an Oct. 21, 1977 newspaper article, "McAuley's Wyoming," also from the Casper Star-Tribune and obviously written somewhat tongue-in-cheek, claims, "Goodman…said he bought the Pedro Mountain Man from the sheepherder." This article also mentions that the sheepherder discovered it. This mythical sheepherder is not named in any of the articles that refer to him. 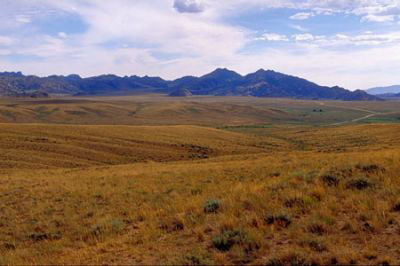 Thus, facts discovered after the recording of the affidavit are sketchy, but Ivan Goodman's ownership by 1950 is certain. This was confirmed by his son Dixon Goodman of Casper. The elder Goodman took the mummy to Dr. Harry Shapiro, curator of biological anthropology at the American Museum of Natural History in New York City. Shapiro examined it, took X-rays and sent the films around that time to George Gill, then professor of biological anthropology at the University of Wyoming.

Gill has confirmed that he received those X-rays and that he and Shapiro agreed that the mummy was almost certainly a human baby, either stillborn or dead shortly after birth. This child probably died of anencephaly, the congenital absence of a large part of the brain.

Later in 1950, when Goodman traveled to New York a second time, he took the mummy to a man named in three articles as Leonard Wadler: Purdy's July 24, 1979 article, mentioned above, plus another by her dated Oct. 9, 1990 and one by John Bonar in the 62nd Annual Wyoming Chronicle, dated March 23, 1980. Bonar adds that a Casper librarian "claims that…Wadler…acquired…[the mummy] for study…" All three articles state that shortly after taking the mummy to Wadler, Goodman was taken ill and died. The mummy was never returned to Goodman's family, and has not been seen again.

This absence of 63 years has not daunted mummy-seekers nor believers in little people or in human pygmy lore. Well before 1950, the sensational press had begun, exemplified by an Aug. 17, 1941, Milwaukee Journal article, "Did a Race of Pygmies Once Live in America?" According to this account, the mummy was a tiny man, 65 years old at the time of death. This seems to have been the consensus before the findings of Shapiro and Gill.

The Milwaukee Journal stated, "discernible by X-ray is the food in the stomach, which appears to have been raw meat. The teeth in the front of the mouth are pointed and of the flesh-eating variety." More compelling yet is the groan of despair supposedly uttered by one of the gold prospectors, upon finding the mummy: "'The curse of the Pedro Chain is upon us!!...Looks like our number is up. . . .'"

Like the child's game where everyone sits in a circle and whispers into his neighbor's ear the words he thought he heard whispered into his own ear, the story continued to change and grow. For example, In "Wyoming's Mystery Mummy," a chapter in Stranger Than Science, published in 1959, author Frank Edwards observes that the mummy's "twisted lips [were] set in a sardonic half grin." This author also repeats the incorrect discovery date of October 1932.

Wyoming history enthusiast Robert David, in a March 11, 1962 Casper Tribune-Herald and Star article, also reports the find date as October 1932. David cites the Pedro Mountain Mummy as a source of "present knowledge of…little people," recounting several legends told by old Shoshone and Arapaho chiefs. One legend states that "…a large mob of pygmies…attacked us viciously, and threatened to kill us all."

The mummy, if it ever turns up again, would be subject to the Native American Graves and Repatriation Act as it is almost certainly the body of an American Indian child taken from a grave. NAGPRA, as the act is called, provides a process for the return of certain American Indian cultural items, including human remains and funerary objects, to the lineal descendants or culturally affiliated tribes whenever possible, and particularly when the items were found unexpectedly on federal land, as is most likely the case here.

In the early 1990s, interest in the mummy remained strong. A popular episode of the television series, Unsolved Mysteries, filmed in 1994, featured the story and included an interview with Dr. Gill. As a result, a Wyoming rancher brought him another mummy, which was found in 1929 or thereabouts in the Pedro Mountain area. Gill sent it to the Denver Children's Hospital and also examined it himself, obtaining X-rays, a DNA sample and a radiocarbon date. These results, Gill said, "confirmed everything that I had ever thought” about the Pedro Mountain Mummy, including the diagnosis of anencephaly.

Is the Pedro Mountain Mummy gone for good? It seems likely, and with no immediate prospect of testing and study, those carried away by myths and speculation will continue in the spirit of Irish poet William Allingham's The Fairies:

Up the airy mountain,
Down the rushy glen,
We daren’t go a-hunting
For fear of little men.

Gold prospector Cecil Main records his discovery of the so-called Pedro Mountain mummy in a cave in the Pedro Mountains about 60 miles south of Casper, Wyo.

The Fort Caspar Museum is located at 4001 Fort Caspar Road in Casper, Wyo., and displays an exhibit about the mummy with photographs and accounts of American Indian legends. For more information, visit the website linked above or call (307) 235-8462.

The twin peaks of the Pedro Mountains lie just southeast of Pathfinder Reservoir. For a scenic drive past them, follow the Seminoe-Alcova Backcountry Byway, 64 miles of dirt and paved roads running north along the North Platte River from Sinclair, Wyo. to Alcova, Wyo. The road follows the west side of Seminoe Reservoir, crosses the river below Kortes Dam at the head of Miracle Mile, and then continues along the east side of Pathfinder and Alcova reservoirs. The Pedros are on the west side of the road, southeast of Pathfinder and about five miles south of the Natrona/Carbon County line. For photos, directions and local history and lore, view the Bureau of Land Management website linked above.