The Notorious Blizzard of 1949

The Notorious Blizzard of 1949

A cold, raging wind drove snow so hard that it scoured the eyes and nostrils like sand. Twenty-one year old Merle Hahn and his father were struggling to drive their cattle into their barn, but ice had frozen over the animals' eyes, blinding them. Handling their cattle in whiteout conditions near their ranch house in northern Goshen County, Wyo. had proven so difficult that Hahn's father decided to leave them where they'd clustered by the south end of the barn. There was no entrance on that side for the herd, so the two men cut a hole. Then, after all that effort, the cattle refused to go in.

Meanwhile, in Pine Bluffs, Wyo., at least two trains were stuck. Their passengers and crews flooded the small town, straining hotels, cafes and private homes to bursting. All across southeast Wyoming, northern Colorado, western South Dakota and western Nebraska, hundreds of people risked their lives in the storm to search for stranded motorists, missing neighbors or family members.

The blizzard started on Sunday Jan. 2, 1949 and proved the worst of the century. The first storm would be followed by two more months of snow and bitter cold. The National Weather Service eventually reported 12 people dead in Wyoming after the first storm. Twenty-eight more died in western South Dakota, Colorado and Nebraska. On March 1, after the federal government had completed rescue operations, the official death toll for the whole region was 76. Unofficial estimates are somewhat higher. 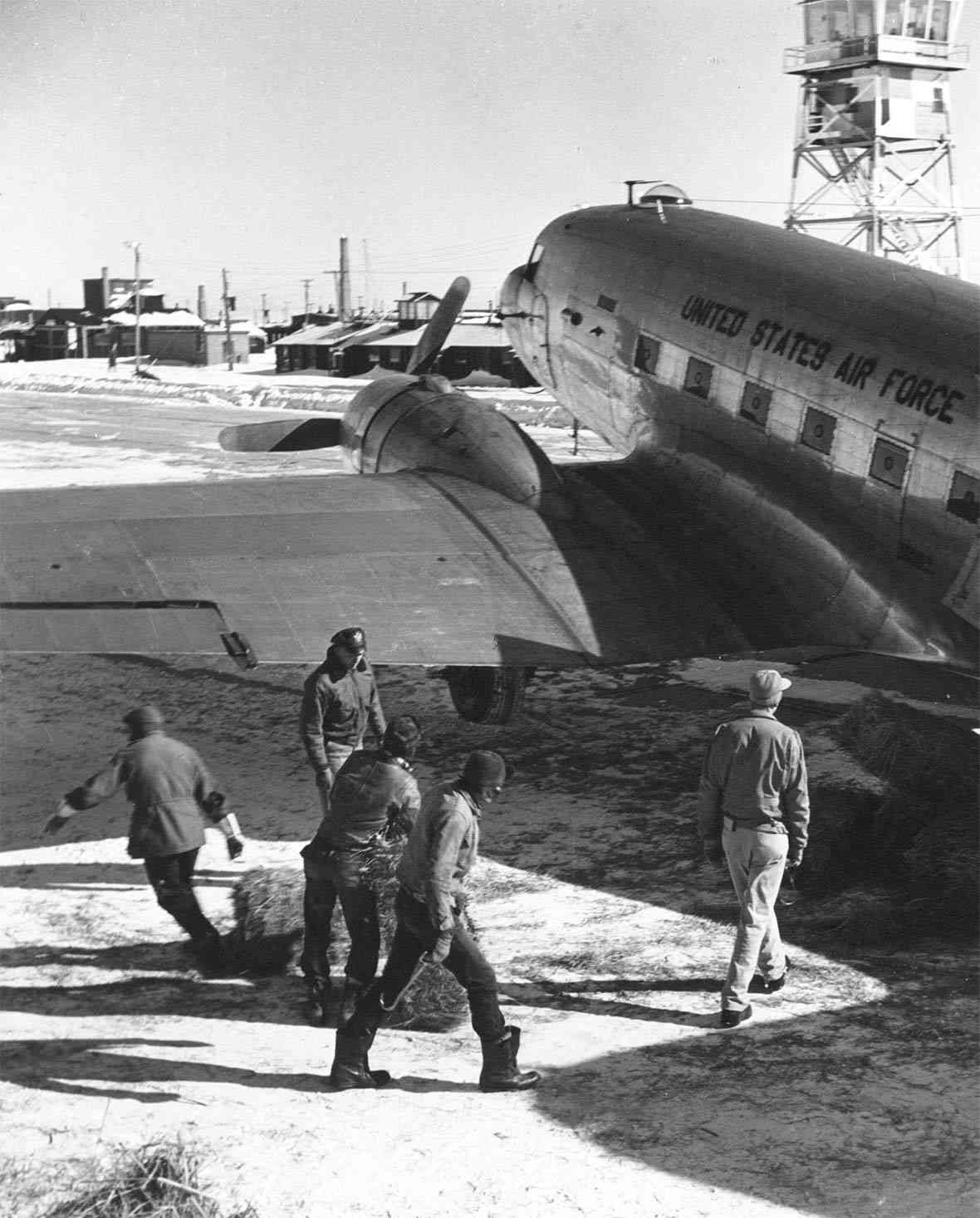 That first Sunday, a dark gray cloud advancing from the northwest “was like hitting a wall,” Bill Miskimins recalled later. He first ran into the storm a few miles from his family's ranch 14 miles northwest of LaGrange, Wyo. Temperatures dropped from the mid-30s in the forenoon to 10 below zero or colder by evening. Winds gusted to 66 miles per hour, and snow blew everywhere. 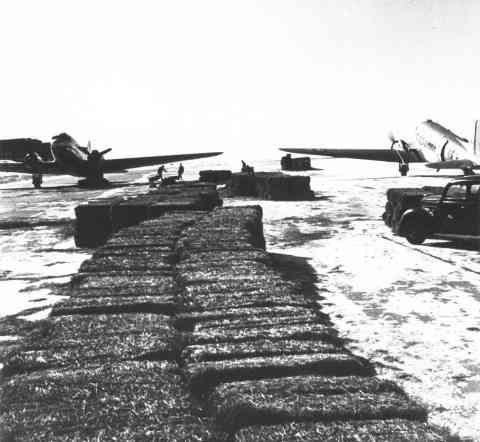 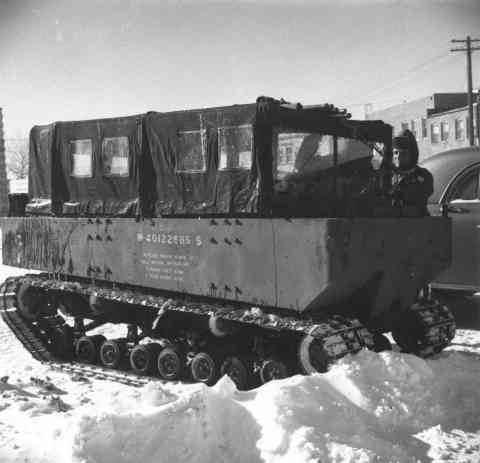 Within hours, roads were impassable. Cars stuck in ditches or were buried under 10-foot drifts. People began to worry about loved ones traveling home after the holidays, while many ranchers were setting out on the usually routine but suddenly dangerous trek to feed and water their cattle and sheep, sometimes pastured miles away. Given that some people got lost in the storm just trying to get from their house to a nearby corral or barn, these longer journeys could turn deadly.

Many travelers struggled from their disabled cars to the nearest ranch house—something they would be strongly advised against doing now. At the houses they were taken in along with other strangers. Some private dwellings were so crowded that there wasn't enough room for all to sleep at once. Some stood while others rested, taking turns.

By Wednesday afternoon, January 5, the sky was clear and sunny but hardships continued because the wind did not let up. More storms piled on more and more snow through the middle of February. Snowplows would clear the road or railroad tracks but overnight the wind again packed snow into just-cleared spaces. Drifts, some as high as 20 feet, were packed so hard that crews used dynamite to break them up.

The toll in human and animal suffering was immense. People whose limbs froze were lucky if they lost only a few fingers or toes. During the first blizzard, a man left his wife and baby in their car to search for help. He died after falling off a snowdrift just three-quarters of a mile from the Fred E. Warren ranch house in southeast Wyoming.

Cattle and sheep suffocated when they were buried in drifts or when their nostrils filled with the dense, grainy snow. Many that survived the initial onslaught later had to be put down because their feet and legs had frozen. In some cases, milk cows’ teats and bulls’ testicles froze off.

“We lost our whole herd,” recalled Alice Kimball, who was 21 at the time and ranched with her husband near Deer Creek eight miles south of Glenrock, Wyo. “I think they died of pneumonia.”

State and federal agencies launched various relief efforts, ultimately referred to as Operation Snowbound. On the first day of the storm, the Wyoming National Guard's 187th Fighter Squadron began ground operations including, by Tuesday January 4, when the storm was still raging, a team of men, probably on snowshoes, who hand-pulled a toboggan load of food to a family north of Cheyenne.

The Civil Air Patrol, National Guard and many small private planes were soon flying, delivering food and medicine. On January 5, A.G. Crane, acting governor since Lester Hunt had been elected to the U.S. Senate the previous November, declared a state of emergency and appointed the Laramie County chapter of the American Red Cross as coordinator for the agencies involved in rescue and relief. A later proclamation by Crane supported the Legislature's creation of the Wyoming Emergency Relief Board on Jan. 19, 1949. Lawmakers appropriated $200,000 and later added another $500,000.

At the peak of Wyoming operations, about 600 pieces of snow-moving equipment were on the roads. The total rescue effort involved countless volunteers and local agencies plus at least 10 major state and federal agencies from the U.S. Army to the National Park Service. Private businesses, including railroad and oil companies, also lent manpower and heavy equipment to the work. Radio stations in Cheyenne, Rawlins, Sheridan and Casper, with special permission from the Federal Communications Commission, broadcast individual pleas for help. So many people called the highway department to ask if their loved ones had been found that officials installed a separate line with an unpublished number, just so they could communicate with their staff and carry on their work.

Operation Haylift began on January 28, when the U.S. Air Force flew a total of about 550 tons of hay from Marshall Field, Kan., and La Junta, Colo., to Casper. Feed was also delivered to other parts of Wyoming, with bales sometimes dropped on the range near stranded cattle and sometimes delivered to towns for convoy to isolated ranches. 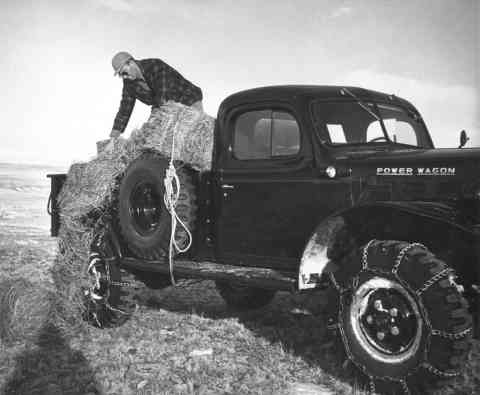 The Wyoming Game and Fish Department began emergency feeding of deer, elk and antelope in early January and continued through the first part of March. About 21,000 animals were given hay, cottonseed cake and alfalfa pellets. Sometimes hay bales were delivered on a toboggan that men pulled by hand because roads were impassable for vehicles. Game birds were also fed corn and small grain.

A survey of approximately 1,000 farmers and ranchers, completed in early June 1949, reported livestock losses for the hardest hit counties: Fremont, Sweetwater, Carbon, Natrona, Johnson, Campbell, Crook, Weston, Converse, Goshen, Albany, Laramie, Niobrara and Platte. Of this 14-county population of 686,000 cattle, 20,000 were estimated dead; and out of 1.5 million sheep, 100,000 dead. Spring breeding also suffered because many bulls were sterile and in general, livestock was left weak and depleted.

Fortunately, gradual spring thaws prevented major floods and furnished abundant water for irrigation. And, despite the high mortality rate in livestock, not all animals buried in drifts died. Bill Fraser, a Pine Bluffs resident at the time, reported that “[T]hree months after the storm a farm[er] near Albin dug a pig out of a snow bank still alive.”

The Hahn cattle never did go into the south end of the barn. Sixty-one years later, Merle Hahn speculated that the cattle were smart enough to know that there was not supposed to be a south entrance; Hahn and his father ended up driving the herd around to the east side where, luckily, no drift blocked the doorway there.

The Stagecoach Museum is located at 322 S. Main Street in Lusk. The museum features an authentic stagecoach from the Cheyenne-Black Hills Stage and Express Line as well as numerous 19th and 20th century relics from the area’s early cattle ranching and homesteading days. A second building houses everything from bathtubs to buggies to medical supplies and includes a recreated homesteader kitchen. Also on the grounds are a one-room schoolhouse and an old-time store. For more information visit the website linked above or call (307) 344-3444.

The Anna Miller Museum, 401 Delaware Ave.: Newcastle, Wyo.’s status as a home base for a National Guard troop, first organized in 1899, led to the construction of an armory building. The troop became a cavalry troop in 1914. The sandstone stable, built in the mid 1930s, has been used since 1966 by the Weston County Historical Society to house Anna Miller Museum. The building was named to the National Register of Historic Places in 1994.

Visitors won’t want to miss the varied collection of artifacts and memorabilia, including period rooms from the 1930s, the one-room Green Mountain Schoolhouse, model pioneer cabins, Cambria artifacts, fossils and a county store. Admission is free, and the museum is open year-round Monday through Friday from 9 a.m. to 5 p.m., with additional hours on Saturdays from 9 a.m. to noon from June through August.