A beau gave Lora Webb Nichols a camera for her 16th birthday in 1899, but her father forbade her to use it at first. He didn’t much care for the man who was 14 years older than Lora. Eventually, though, he softened and allowed her not only to take photographs, but gave miner Bert Oldman permission to marry his youngest daughter. 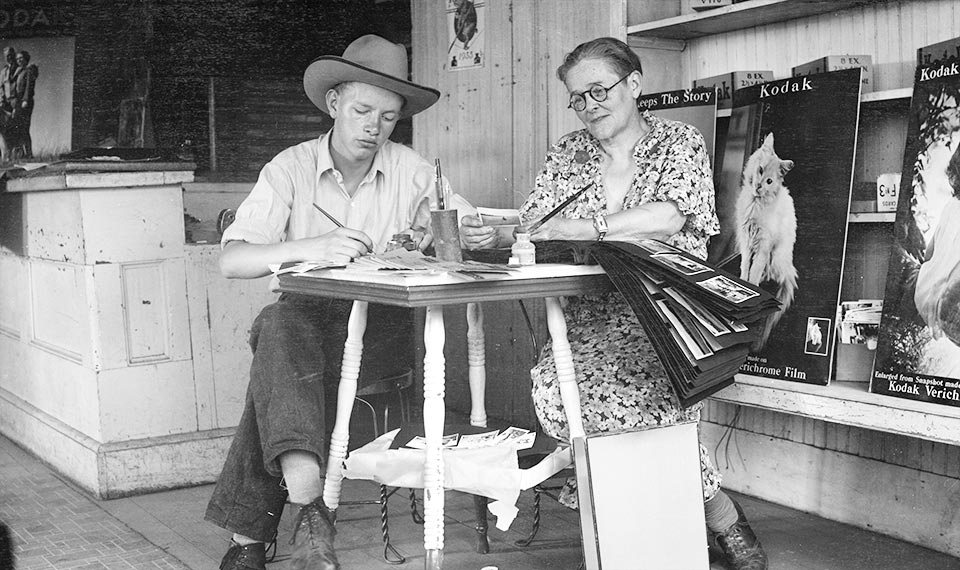 The Nichols family lived on a homestead about a mile away from Encampment, Wyo., then in the midst of a great copper boom that many thought would transform the town into a western industrial stronghold. Though that turned out not to be the case, Lora’s love of photography, coupled with her faithful diary keeping and her penchant for saving things, resulted in a rich collection of historic items that continue to provide information and insights into the upper North Platte Valley at the turn of the 20th century. 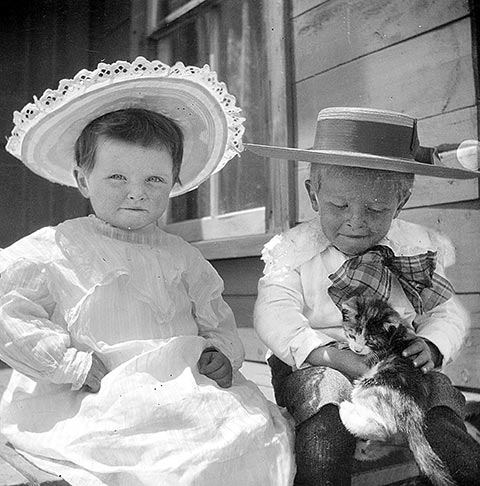 Lora Nichols was born on Oct. 28, 1883, in Boulder, Colo., the youngest child of Horace and Sylvia Wilson Nichols. Her grandfather, David H. Nichols, had participated in the 1864 Sand Creek Massacre and later would serve as the eighth lieutenant governor of Colorado.

Lora had two siblings: Guy Clifford and Lizzie May. Her father worked at the Colorado State Penitentiary, in Canyon City. When he was on break from outdoor patrols, he sat on a wooden box that once held “Colorado’s Best” laundry soap. Most of the letters were worn off, but he liked those that remained—LORA—and gave his daughter that name. Webb was the name of a teacher in the Boulder schools. The family moved to Wyoming’s upper North Platte Valley in 1884 after his brothers encouraged Lora’s father to ranch there.

Lora began keeping a diary as a school project in 1897 when she was 13 years old. Nancy F. Anderson, a close friend of the Nichols family and author of Lora Webb Nichols: Homesteader’s Daughter, Miner’s Bride, relied on Lora’s diary and her later manuscript, “I Remember: A Girl’s Eye View of Early Days in the Rocky Mountains.” She referred to Lora as a “self-directed learner” and explained that her diary contained “innumerable poems, sayings and excerpts from longer works which were to guide her improvement.” Lora loved to read and mentioned Louisa May Alcott and Charles Dickens in her diary. She recorded social events like dances and personal information as well.

Lora considered May 20, 1897, a “red-letter day” because the Nicholses returned to the ranch near Encampment after a four-year-long absence. Their arrival coincided with the staking out of the town site. Anderson, in her book, noted, “Lora was essentially an outdoor girl. In the absence of her older brother Cliff, she was her father’s compatriot on the ranch.” Cliff had remained in Colorado to attend school.

In 1893, her father had sold his cattle and left the ranch in a relative’s care. The nation was in one of its worst-ever depressions at that time, and economic reasons may have contributed to the move. Lora recalled that the cattle sold for $12 per head “and nothing under a yearling counted.” At that time, her father took his family to Colorado where he worked again at the state penitentiary.

After their return to Wyoming, Lora met Bert Oldman, a miner who came from the Colorado Springs area, in March 1899. He turned 30 in August and gave her the special gift of the camera in October for her 16th birthday, but her father didn’t allow her to use it until November, after he had gotten to know Bert a little better.

Lora recorded in her diary that Bert took her picture with the Kodak on Nov. 19, 1899. A few days later, she took a photograph of her mother and one of her beloved pony Nibbs and her cat Yankee. Lora wrote later in her diary that the camera was “the best fun.” Her father ordered her “a developing outfit,” and by January 1900, Lora was taking photographs and printing them as well.

The couple married at her parents’ house on Oct. 15, 1900, a few days before her 17th birthday. Anderson explains that Lora’s professional years are difficult to pinpoint because she was already being paid for taking portraits when she married Bert Oldman. Prospectors asked her to take photographs of their prospect holes. 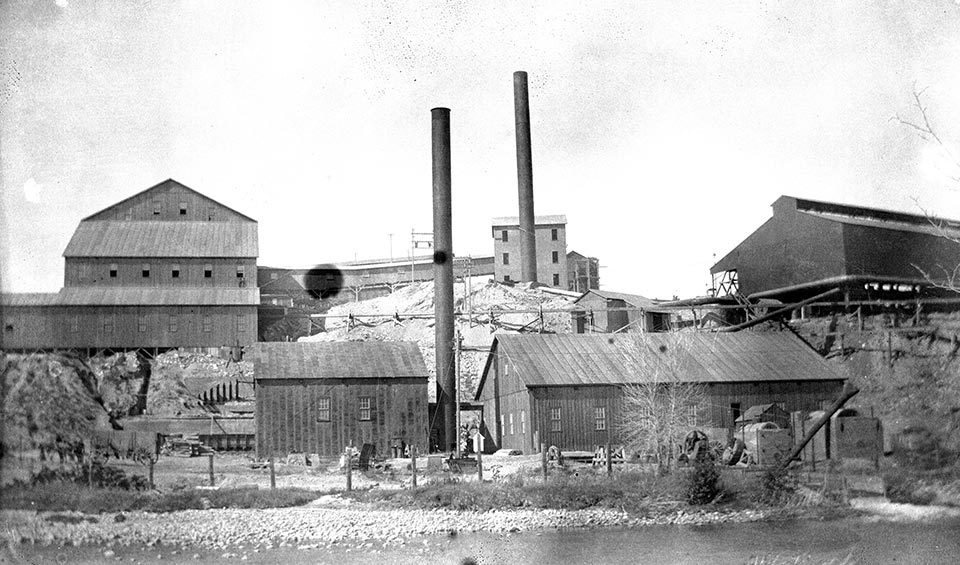 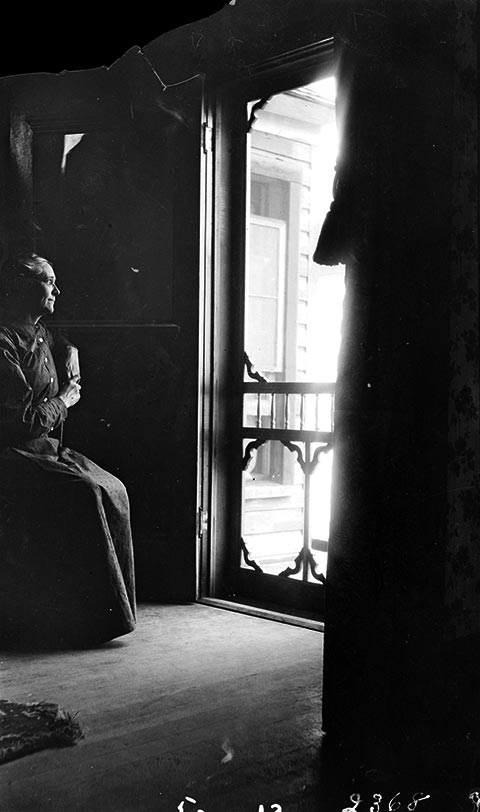 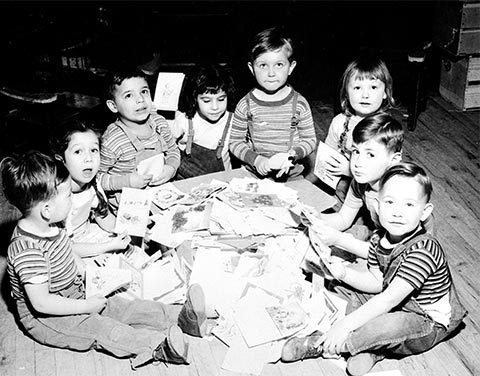 The Oldmans had a son, Albert Horace, born Nov. 21, 1902. Lora noted that the local doctor had given her chloroform and wrote of childbirth, “I tell you it was a snap.” Even so, she had to stay in bed for five days. Daughter Sylvia was born two years later. Lora also recorded in her diary Nov. 4, 1904, that she voted for the first time. “I felt very important, being a voter,” she wrote.

Lora divorced Bert in 1910. Many years later, her daughter-in-law Vera Oldman speculated that perhaps the difference in their ages—a matter that had caused Lora’s father much concern—may have been a factor in the breakup.

A second family—and a photo business

Although she was editor and publisher of the Encampment Echo from 1925-1930, Anderson said that there’s really very little of Lora revealed within its pages. She operated her Rocky Mountain Studio mostly during the decade from 1925 through 1935, taking photographs and printing them.

She also developed photographs taken by others, however. If she liked the “scenes,” as she referred to them, she would pay for them and use them in her postcard business. Lora also commissioned local cowboys who worked on the early day dude ranches in the area to take photographs when they went on pack trips. In 1929 and 1930, a number of Lora’s articles appeared in a short-lived Wyoming literary magazine, The Pepper Pot, which was published in Casper.

According to Vera Oldman, Lora worked hard to supplement her family’s income. “She always did photo work. She worked in the post office, owned and published the Encampment newspaper, owned and ran the Sugar Bowl, a local restaurant, and cooked at the [dude] ranch at the A bar A.” She was also active in community groups, serving on the District 18 school board as well as in organizations including the Order of the Eastern Star, the Rebekahs and the Presbyterian Church. She also enjoyed history and was active in both the state and county chapters of the historical society.

Anderson said she considers Lora’s Sugar Bowl 1930s portraits of Civilian Conservation Corps men “one of the most wonderful parts” of the collection of 24,000 negatives that she accumulated, now housed at the Grand Encampment Museum. At the Sugar Bowl, the men hammed it up for her, sitting on the stools at the counter and pretending that their soft drinks were beers.

The “very complex” negative collection includes photographs taken by Lora as well as some taken by her mother and her sister and other family members. “I don’t know if she ever threw a negative away,” Anderson said. Lora also bought some "scenes" she liked from others who had taken the pictures, and she perhaps also paid the cowboys at the dude ranches for the photographs they took.

Anderson admits that she doesn’t know why Lora and her family saved so many items, but thinks it may have been because Lora was looking forward to the eventual creation of a facility to house her photographs or possibly just that she was personally driven to keep things.

All of Lora’s negatives are nitrates and acetates, Anderson said, although some glass plates, which Lora “literally found behind a building in Encampment,” are included. According to Anderson, Lora never used a camera that required glass plates.

Her photographs include many portraits, Anderson said, explaining that Lora’s work actually “documented the life of the town, area ranches and the coming of the railroad.” The photos, together with her diary and the local newspapers that Lora saved, as well as her memoir, “I Remember,” which concludes in 1905, create a vivid picture of “every aspect of the upper North Platte Valley” from the early days until Lora’s departure in the 1930s.

When Lora left for California for health reasons in 1935, she discontinued most of the Encampment studio work, but she “kept snapping on throughout her life,” Anderson said. She went to stay with a friend in Stockton. There, she took a job as a domestic at the Stockton Children’s Home, and eventually rose to the position of superintendent. Still, she made frequent visits to Encampment.

All four of Lora’s and Guy’s sons served in the Armed Forces during World War II. Guy had stayed in Encampment after Lora’s move to California. He died there in 1955.

As for Lora, she retired from her position in Stockton in 1956 and returned to Encampment about a year later. She died at her home on Aug. 31, 1962. Both she and Guy are buried in the Mountain View Cemetery a few miles east of Encampment.

Anderson recalled that during the last six or seven years of Lora’s life, she usually carried at least two cameras with her everywhere she went. Her son Dick often traveled with her on hunting and fishing outings. Lora carried the extra cameras because, she said, “You never know when there’ll be an elephant down the street.” 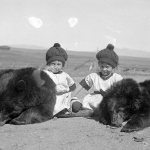 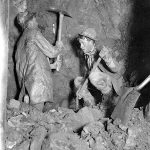 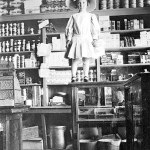 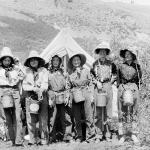 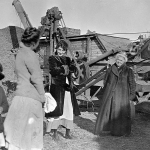 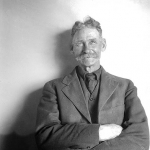 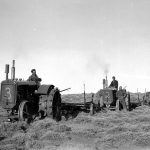 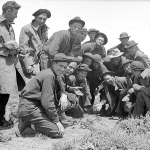 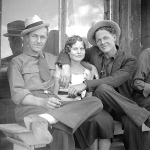 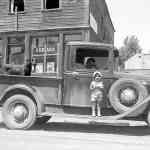 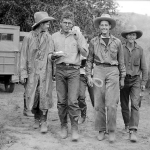 Encampment, Wyoming: Copper, Lumber and Rendezvous
J.E. Stimson and His Photographs
Photographer on the Pitchfork: Charles Belden's Version of the West

More about Encampment from Wyoming Places