The phrase “walk a mile in my shoes” takes on chilling connotations when the shoes are made of human skin. And although the creation of such a pair sounds so gruesome as to be unbelievable, the shoes exist and are displayed at the Carbon County Museum in Rawlins, Wyo., where additional items reveal more of the story of the mysterious outlaw Big Nose George Parrott. 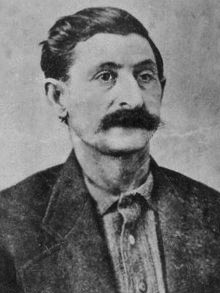 Rawlins physician John Osborne had the shoes made from Parrott’s skin after his March 22, 1881, lynching and wore them to his 1893 inaugural as Wyoming’s governor. Osborne later served as a director in the Rawlins National Bank and displayed the shoes in a glass case in the front lobby there.

What led George Parrott to such a grisly end? Even before he died, he was known for frontier crimes. He had been arrested for horse theft, tried by a justice of the peace and acquitted. He was also believed to have kept headquarters in the Hole-in-the-Wall country west of present-day Kaycee, Wyo., with a number of other outlaws of the time.

His name perhaps was a reference to his large, beak-like nose or possibly was a derivation of the French name Parrotte. He developed a reputation for stealing from travelers on stagecoaches and then progressed to train robberies.

In August 1878, Big Nose George and his gang, which included Dutch Charley Burris, planned a theft from the Union Pacific Railroad pay car near Como, Wyo., east of Medicine Bow. At that time, the UPRR carried cash via the pay car monthly for its own company payroll. The bandits loosened a spike in the rails, wrapped it with telegraph wire and hid in the sagebrush, planning to tug the spike and dislodge the rails to derail the train so they could abscond with the money. But sharp-eyed railroad employees spotted the wobbly spike, repaired the damage and alerted lawmen before the train arrived.

Big Nose George and his men fled to Rattlesnake Canyon at the base of Elk Mountain, about 25 miles southwest of the crime. Carbon County Sheriff’s Deputy Robert Widdowfield and Union Pacific detective Henry “Tip” Vincent tracked them there. The outlaws killed them. The murders occurred Aug. 19, 1878.

Big Nose George and his gang were later reported to have stolen several thousand dollars in cash from a Miles City, Montana Territory, merchant named Cahn when, in the spring of 1879, Cahn accompanied the military paymaster’s wagon train from nearby Fort Keogh to Bismarck, Dakota Territory. Cahn was traveling to the East on a purchasing errand; the soldiers were headed to the Northern Pacific Railroad to retrieve funds to be distributed at the fort.

The outlaws eluded capture for a while, but it appears Dutch Charley was caught early in 1879. Tensions ran high in southern Wyoming along the Union Pacific Railroad; people were incensed about the murders of the lawmen.

On January 23, Charley was being transported from Laramie to Rawlins for trial when the locomotive stopped for coal and water at Carbon. There, a mob boarded the train, dragged him off and hanged him from a telegraph pole. He was not considered worthy of burial in the Carbon Cemetery, where Deputy Widdowfield was laid to rest. Dutch Charley’s unmarked grave is located somewhere in the sagebrush outside the cemetery boundaries.

One account indicates that the criminals apparently bragged in the Miles City bars about their recent successful exploits, including the Wyoming Territory murders. Someone wired Carbon County Sheriff James Rankin, who headed to Montana in July 1880 and brought Big Nose George back to Wyoming Territory. Two other members of the gang had escaped. Rankin escorted his charge first to Laramie and then rode with him on the train headed to Rawlins.

On Sept. 13, 1880, Big Nose George was arraigned in Rawlins. He told his lawyer his name was George Francis Warden, reported his birthdate as being in April 1843 in Dayton, Ohio. 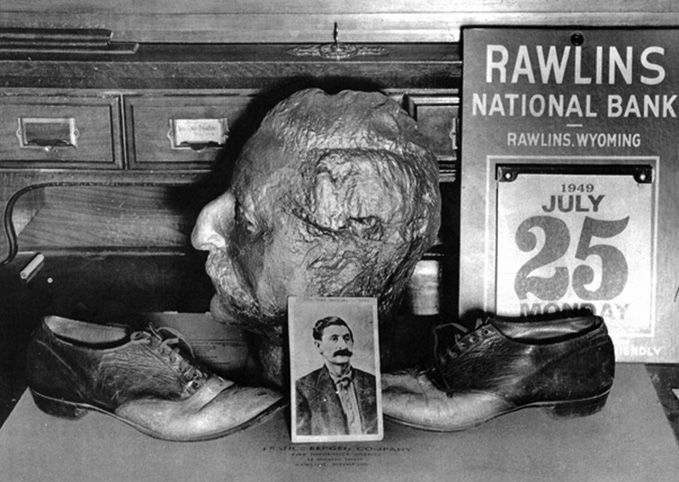 He first entered a guilty plea, and then changed his plea to not guilty. On Nov. 16, 1880, the jury was sworn, and two days later, George again changed his plea--back to guilty. A motion was filed for arrest of judgment and sentencing, and the court took this under advisement, but denied the motion on Dec. 15, 1880. At that time, death by hanging was the punishment for those found guilty of murder. Big Nose George was sentenced to hang on April 2, 1881.

Ten days before the scheduled execution, Big Nose George tried to escape from the local jail. He had used a pocket knife to saw through the rivets on the heavy leg shackles that bound him and struck jailer Robert Rankin in the head with them. Rankin’s wife, Rosa, discovered the attempted jailbreak and managed to close the outside door, thwarting Big Nose George’s plans. She fired her husband’s revolver in the air, and men came running to help.

Big Nose George’s hands were tied behind his back, and a noose secured around his neck. The mob made him stand on an empty kerosene barrel, and tossed a rope over the crossbar of a telegraph pole. But the rope broke. The bandit fell, begging to be shot. Instead, the lynch mob replaced the noose and made him climb a 12-foot ladder. This time, with the repaired leg irons weighing him down, climbing was difficult. Finally, he choked to death. One report estimated a crowd of as many as 200 people gathered to watch.

No one came forward to claim the body. Dr. Osborne, who had been asked to be present during the hanging to ensure the outlaw died, and another Rawlins doctor, Thomas Maghee, a Union Pacific Railroad physician and surgeon, claimed the corpse for medical study. Osborne made a death mask and had the outlaw skinned and the shoes made; Maghee studied the criminal’s brain. Big Nose George’s skull was cut into two pieces. Maghee gave the top half to his protégé, Lillian Heath, who later became Wyoming’s first female physician.

The lower skull half was buried in a whiskey barrel with the rest of the outlaw’s bones. In 1950, the whiskey barrel was discovered in Rawlins when workers were excavating for a new department store at Fifth and Cedar streets, and the skull halves were briefly reunited and then split up again. The skullcap is now housed at the Union Pacific Railroad Museum in Council Bluffs, Iowa, and the lower half of the skull is displayed at the Carbon County Museum in Rawlins. 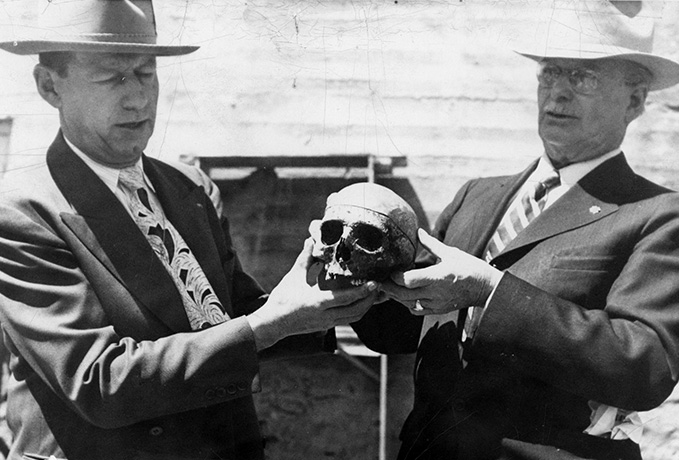 Renowned forensic anthropologist George Gill and Wyoming State Archeologist Mark Miller reunited the halves of Big Nose George’s skull in 1995 when they worked on a study of frontier violence with University of Wyoming graduate student Kristi McMahan. The study confirmed that the skin on Osborne’s shoes was indeed human, but neither the shoes nor a small piece of skin on the skullcap were tested biochemically because such testing would have destroyed them. Gill hoped to match the skin on the shoes to the skin on the skull and to prove that the skin did indeed belong to the man known as Big Nose George.

Throughout the years, several people from throughout the United States and Canada who believe they might be relatives of the outlaw have contacted Miller and historians at the Carbon County Museum in Rawlins. Miller, who recently retired as state archeologist, also has family connection to the story. Miller’s great-grandfather, I.C. Miller, served as Carbon County sheriff at the time of Big Nose George’s lynching, but was working in another area of the county that night.

Miller and Gill haven’t done any new work on the case since the McMahan study. Miller explains that they are proceeding with caution regarding any further DNA testing. There is no DNA match yet, and there likely won’t be one soon.

Questions about who Big Nose George Parrott actually was complicate matters. Miller suspects the man did not lie to his lawyer when he gave a different name, but needs to know more about who the man actually was before pursuing familial links. An incorrect assumption could lead to wrong results, and with the small size of the skin sample that’s available, the scientists might not have a second chance to prove the identity of the man. “In fact, we may not be able to submit a sample for study, because we don’t have much,” Miller said in a 2014 email interview. “I don’t know that we will have new research available for a year or more.”