Anchor Dam and the Reservoir that Wouldn't Hold Water

Anchor Dam and the Reservoir that Wouldn't Hold Water

Anchor Dam—some writers have called it a “boondoggle”—stands today high above a small pool of water on upper Owl Creek, a tributary of the Bighorn River in the southwest corner of Wyoming’s Bighorn Basin.

The U.S Bureau of Reclamation built the dam in the 1950s. It was intended to provide a reliable supply of irrigation water, but after three years and $3.4 million spent on construction, it became clear that the geology of the area would not allow the reservoir to fill. After more than a decade of continuing attempts at remediation, the final cost of the dam topped $7 million—and its reservoir still holds very little water.

Owl Creek rises in the Absaroka Mountains of northwestern Wyoming, and was the site of early agriculture in the area, when homesteaders in the 1890s settled the region that would become Hot Springs County. From the beginning, water was important. Ranchers used irrigation ditches to bring water from Owl Creek to pastures or to help grow livestock feed crops like alfalfa. 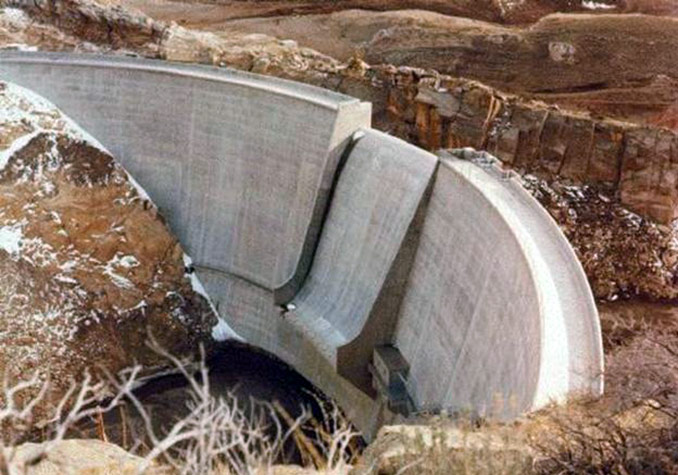 After 1900, droughts motivated local landowners to look for a source of more water in the area. A small group of ranchers made an abortive attempt in 1909 to bring Bighorn River water to the Owl Creek drainage or build a dam there. The attempt failed due to lack of funding. In the 1930s, the Bureau of Reclamation investigated possible dam sites on the stream, but did not immediately begin any project. The dam was not authorized until 1944, when the federal Flood Control Act appropriated money for the Owl Creek Unit of the Pick-Sloan Missouri Basin Program.

Many water projects were being constructed across the West at this time, as federal bureaucracies struggled with each other to gain control of the nation's water development. Historian Donald Worster describes in his book Rivers of Empire how the leadership of the Bureau of Reclamation, which was responsible for irrigation projects, felt threatened by the ambitious plans of the heads of the U.S. Army Corps of Engineers, which had charge of flood control.

Structures built on rivers could serve one or both purposes, which brought the agencies into collision. The rivalry resulted in construction of dozens of dams and other projects by both agencies that might otherwise have not been built at all. Many of these projects, including Anchor Dam, were built under the Pick-Sloan Missouri Basin Program, started in 1944 and named for the heads of both agencies.

At least some local residents looked forward to the project. In the January 1944 issue of the monthly Hot Springs County News, U.S. Army Reserve Capt. Sig Harrison wrote that "our farmers and ranchers are, as a whole, in a healthy condition, with prospects of greater improvement come the building of the Embar reservoir on Owl Creek." The name Embar came from an early rancher's brand; the official project name Anchor came from the Anchor Ranch in the area that was to be flooded by the reservoir.

Before project construction could start, however, Bureau of Reclamation policies mandated that the Owl Creek farmers needed to organize an irrigation district, which would oversee distributing water to members and collecting payment.

A number of farmers in the area did not want to join, for two reasons. First, some of them felt they did not need the extra water and that their business would suffer if they incurred repayment costs for the project. Under Wyoming’s first-in-time-first-in-rights system of water law, farmers and ranchers with water rights filed earlier in time are allowed to take all the water they are entitled to before their neighbors with later rights get any. On Owl Creek, the farmers and ranchers with later-dated and therefore lower priority water rights tended to favor the proposed reservoir.

Second, the Bureau of Reclamation had a rule that farmers getting project water could not own more than 160 acres, or 320 if married. This rule contemplated a small family farm on fertile soil with a favorable climate. In the high altitude, short season, arid Owl Creek Mountains, 320 acres was nowhere near enough for cattle ranching. Efforts by local dam proponents to force reluctant ranchers to join the irrigation district prompted a series of lawsuits that held up progress on Anchor Dam until 1954. In this year, Wyoming’s U. S. senator, Frank Barrett, succeeded in having Anchor Dam exempted from the acreage limit. A number of ranchers then changed their minds and joined the irrigation district, and the Bureau of Reclamation began seriously planning for construction.

When Foley Brothers, Inc., a Minnesota firm, began excavating Anchor Dam's foundation site in May 1957, workers found that the rock was not suitable for construction of a dam at that point in the canyon. After the site was relocated some distance upstream, they dug into a pair of large cavities in the canyon wall at the new place. The bedrock in the canyon is dolomite, a sedimentary rock similar to limestone that can be dissolved by groundwater over time. Dolomite was present, a little way underground, under the entire floor of the future reservoir.

According to historian Kathy Lindholm, who interviewed local residents about the dam in the 1990s, area ranchers knew about water seepage and losses underground along Owl Creek long before the dam was built. Rancher Henry Freudenthal had strongly opposed the early efforts to build a dam in the area because it would not hold water “on account of the red beds.”

Once it became clear that the federal government was prepared to spend large amounts of money on the project's construction, however, Freudenthal dropped his opposition and declared he would “entrust this point to the judgment of the government engineers.”

Other residents had noticed irrigation ditches where water would escape “down a big hole into the ground,” and sinks were also reported to exist in the bed of Owl Creek itself. State and federal geologists were repeatedly called in to evaluate the dam site; most gave cautious approval and called for further studies and subsurface investigation. One geologist went so far as to declare that the sinkholes appearing in the future floor of the reservoir were not caused by bedrock conditions and would therefore not be a concern over the whole lake bottom. Later events proved him wrong on this point.

At some point in the geologic past of the region, enough water had flowed through the rock layer to create large cavities, which then filled with debris and earth and became difficult for the engineers to detect underground. A similar process is at work today forming the collapsed caverns known as sinkholes in states like Florida and Alabama.

The two cavities discovered in the Anchor Dam excavation of the dolomite layer were so large that it took more than 2,000 cubic yards of concrete to fill them. Several similar cavities were discovered and filled in the area that would be flooded after the dam was built. By the time this work was completed, the project had fallen a year behind schedule and exceeded the original budget by $116,000. 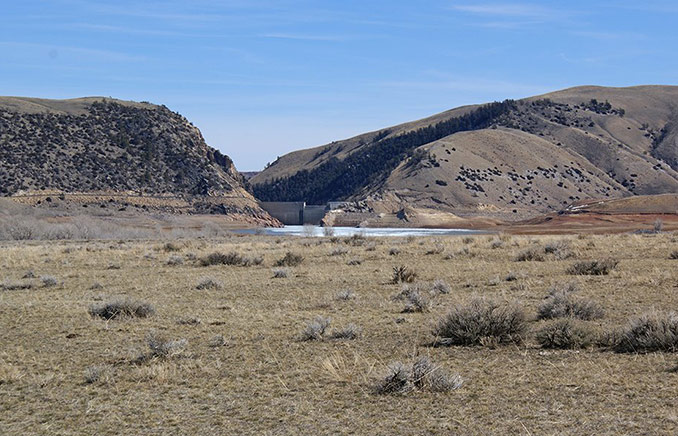 The 208-foot high dam was completed on Oct. 26, 1960, and filling of the reservoir began the following spring. The lake, always intended as a small reservoir, was to have a capacity of 17,419 acre-feet. For comparison, Alcova Reservoir on the North Platte River near Casper holds 184,405 acre-feet, and the nearby Pathfinder reservoir holds 1,016,000. (An acre-foot, the standard Bureau of Reclamation measure, is enough water to cover one acre of land one foot deep.)

The reservoir started to fill, but within days, it began to drain. Water leaked through previously undiscovered sinkholes and permeable bedrock and emptied the lake before it reached capacity, a pattern that was to repeat again and again in future years. Testing by Bureau of Reclamation scientists revealed that this water apparently never found its way back into Owl Creek, but drained deep underground through joints and fissures.

During one especially wet spring, the lake filled and stayed that way long enough for someone to take a picture. This completely atypical image then became the cover photo for public Bureau of Reclamation documents about the dam for several decades. Lindholm described how, while privately admitting the project's failure, Bureau personnel tried to gloss the story in public because they did not want to damage their agency's reputation or put funding for future projects at risk.

In spite of further—and expensive—efforts to fill sinkholes or build small dams around them, the reservoir has never served its intended use. By the mid-1970s, when the Bureau of Reclamation largely stopped spending money on Anchor Dam, 54 sinkholes had appeared and been plugged, year by year. The total cost of the project, as estimated by Lindholm, exceeded $7 million.

Now, the small amount of water that can be stored is used for occasional late season irrigation. Discussing the dam's impacts on the region in 1999, the official Bureau of Reclamation Historian William Simonds notes that "recreational opportunities are limited. The primary recreational activities are land based, consisting of camping, hunting, and hiking” around the reservoir. “[I]t seem[s] unlikely that the project will ever be able to provide [the] full range of benefits that were envisioned."