"Immeasurable wealth," declared the Casper Tribune-Herald in 1930, "is only awaiting the touch of Aladdin's magic lamp—water—to bring it in to existence." The paper anticipated a boom in local agriculture from the construction of Alcova Dam on the North Platte River in central Wyoming, some 30 miles southwest of Casper, Wyo. 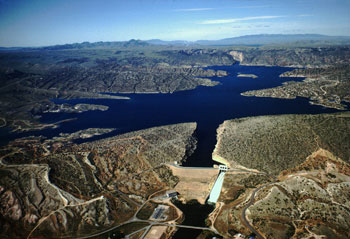 The dam, completed in 1937 by the U.S. Bureau of Reclamation, was named for the nearby town of Alcova, which was originally planned as a health resort in the 1890s. The town lay just downstream from a steep-walled canyon that had hot springs at the canyon floor, and was reportedly named for coves in the course of the river.

The crowds of tourists that were expected to help the resort prosper never materialized, however. Alcova remained a small town. By 1903 there was a school for children of local ranchers. Businesses catered to travelers between Casper and the Split Rock country or Rawlins, Wyo.

Life in Alcova could be primitive in those early days. Rachel Royce Cowdin, who grew up there in the early 1900s, wrote down some of her memories, which were published in 1991 in the Alcova Centennial book, Memories of Alcova. During the winter of 1903, her mother "took old pieces of tarpaulin, gunny sacks, or anything she could find to cover the dirt floor."

Sheep ranching drove the area's economy, meaning that "all bills and obligations were paid just twice a year," after spring shearing and fall lamb sales. Cowdin's family ran a livery stable and boarded horses; they would also feed travelers. "One rule that Mama had was that no one could come in wearing guns. Some of the men always sat so their backs were to a solid wall and where they could watch all the doors and windows."

The Casper Chamber of Commerce and Casper newspapers began lobbying for construction of Alcova Dam as early as 1905, when Pathfinder Dam was being built in Fremont Canyon, just upstream of Alcova, for flood control and water storage. Most of the stored water was reserved for Nebraska farmlands, and many Wyomingites who wanted a water source for local agriculture began to promote a second dam for the purpose. The main obstacle to the construction was that it would be a major undertaking requiring federal funding and support.

The Casper Tribune-Herald claimed in 1927 that a second dam on the Platte would cost $13.6 million and irrigate "more than 88,000 acres of fertile land near Casper." The resulting agricultural growth, the paper maintained, would provide a more stable base for the local economy than the current oil boom. The Bureau of Reclamation and the state began to investigate the Alcova area for a dam site.

In 1933, President Franklin Roosevelt authorized construction of this dam, the Casper-Alcova project, as part of the National Industrial Recovery Act, designed to help the country out of the Great Depression. The Casper-Alcova Project was later renamed the Kendrick Project for Wyoming Senator John Kendrick; the irrigation district set up to distribute the water remained the Casper-Alcova Irrigation District.

Agriculture in central Wyoming, which is dry and windy with a short growing season and poor soil, has historically been more centered on ranching than farming. While irrigation helps produce crops, it also allows ranchers to raise feed for their own stock or to sell to others. In the agricultural industry, for many reasons, having a large supply of stored water provides more security than depending entirely on each year's rainfall.

Alcova Dam was built in a notch where the Platte flows into a ridge of rock and out the other side. This puzzling geologic feature, known as a superimposed stream, is seen elsewhere in Wyoming—at Devil's Gate and Wind River Canyon, among other locations. The notch at Alcova began to be created when the Platte was flowing in a channel hundreds of feet higher than where it does today.

Under this channel, some ridges of rock, harder than the looser sediment around them, lay buried. Over time, as the river flowed, water cut down through everything, hard rock and softer sediment alike. It sliced gaps through the hard-rock ridges that later remained after the softer sediment had eroded away. Alcova Dam was built in one such gap, and the water backed up into a lake behind the ridge. 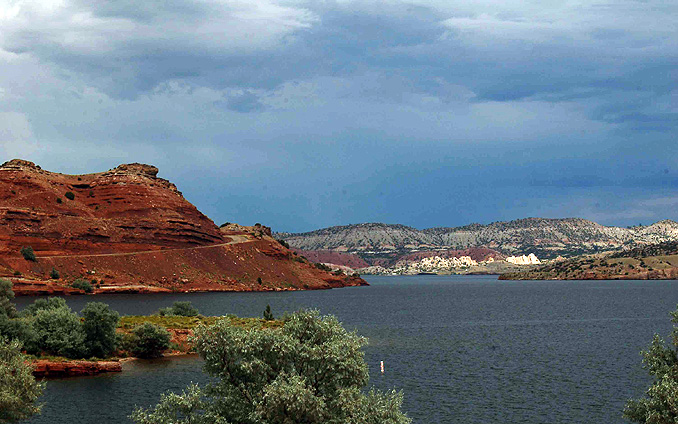 W. E Callahan Construction of Texas and Gunther and Shirley of California began construction on the dam in August of 1935, one month before President Roosevelt gave final authorization for the project. Builders wanted to take advantage of the low summer flows and good weather for the initial work of clearing the dam site and tunneling to divert the river.

Many of the men who worked there were from the Natrona County Transient Relief Camp, formed in response to the hard times of the Depression years. The book Memories of Alcova noted that "many of [the] men were [on] relief or unemployed, and were unable to equip themselves with proper working clothes."

The dam was finished in 1937 at a cost of $20 million. Tourism and recreational use of the area began as soon as the lake was filled in 1938. The Civilian Conservation Corps, a national organization created as part of President Roosevelt's New Deal, built roads and facilities for camping and boating. People came from Casper and from other parts of the state to fish or boat on the new lake. This helped stimulate the economy in the small town of Alcova, which has a population of 76. Tens of thousands of people visit the lake every year.

The Bureau of Reclamation maintains water levels in Alcova at a relatively constant level, in order to ensure sufficient water to fill the Casper Canal during the irrigation season. Water levels in the Pathfinder and Seminoe reservoirs upstream, by contrast, are allowed to fall dramatically in drought years so that Alcova’s water levels can be maintained. The steady water level also makes Alcova more attractive for recreation than the other reservoirs.

Alcova and the Kendrick Project today

The canal, one of the main features of the Kendrick Project, flows on the northwest side of the North Platte from Alcova to Casper, and provides water to irrigators in the Casper-Alcova Irrigation District. 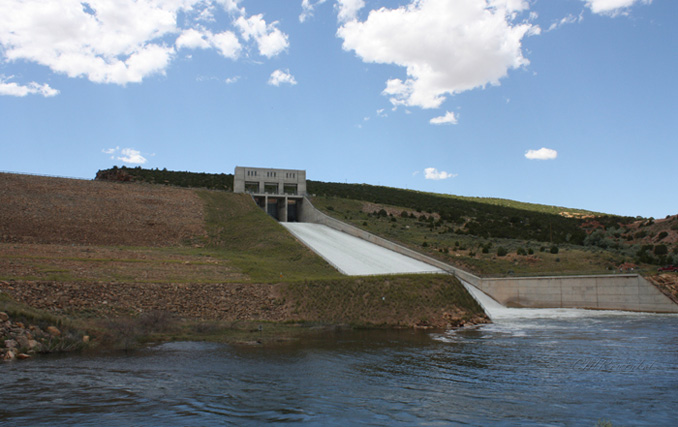 Some 66,000 acres of unclaimed federal land were initially set aside for sale to landowners who would get water from the Casper Canal. Under standard Bureau of Reclamation policies, irrigation water from the project could be supplied to only 160 acres for a single landowner. This 160-acre figure had been chosen for regions of the country such as the Midwest with more fertile soil and a longer growing season; most ranches in Wyoming by necessity are much larger. Even twenty years after the dam construction was completed and the maximum plot size was increased to 480 acres, settlement was slow. Only 24,253 acres of the original 66,000 were ever placed under irrigation.

A power plant with two generators was constructed at Alcova Dam in 1955, which now provides some 88.8 million kilowatt-hours of electricity to central Wyoming. This would supply electricity for about 8,000 Wyoming homes, according to US Energy Information Administration data.

In 1990, there were 300 landowners in the Casper-Alcova Irrigation District; as of 2003, there were around 500. Today, the water is mostly used for growing alfalfa or irrigating pastures, usually as part of larger ranching operations.

Although the glowing predictions of the Tribune-Herald for unlimited riches never came true, the Alcova project brought benefits including tourism, hydropower and irrigation to central Wyoming. 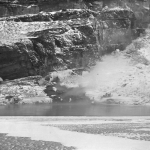 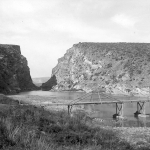 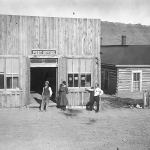 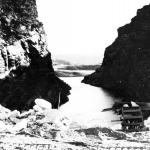 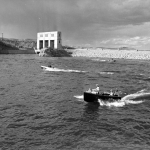 More about Alcova at Wyoming Places

Alcova Lake is located 33 miles southwest of Casper on Wyoming Highway 220. Visitors can enjoy a variety of activities, including boating on the lake, driving through the small town of Alcova, or, for those who want to be active, hiking the Dinosaur Trail on a fossil-rich hill above Cottonwood Beach on the west side of the lake. The Natrona County Parks Department maintains campgrounds and picnic areas. For more information, see http://www.recreation.gov/recAreaDetails.do?contractCode=NRSO&recAreaId=1228&agencyCode=129.