In Wyoming, with our small minority populations, it’s easy to feel morally distant from events like the Asian-spa shootings in Atlanta last week. Whatever mix of religion, armament, opportunity and virulent misogyny motivated the shooter, race hatred was in there, too.

Maybe. Still, this seems a good time to remember two events from Wyoming’s past. In one, local fear and hatred of Chinese workers led to the worst instance of anti-Asian violence in the continental United States: 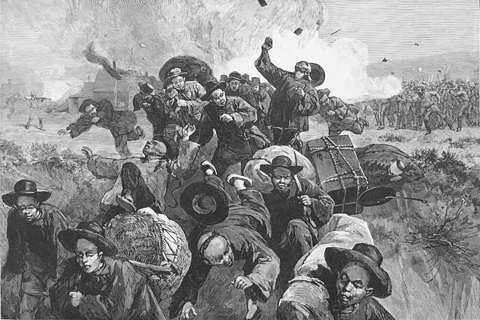 On Sept. 2, 1885, long-simmering tensions between White and Chinese coal miners in Rock Springs, Wyoming Territory, boiled over into a massacre in which Whites murdered 28 Chinese, wounded 15 more, and looted and burned all 79 shacks and houses in Rock Springs’ Chinatown. Though the remaining Chinese miners wanted desperately to leave Wyoming, the Union Pacific Railroad, which owned the mines, refused to grant them railroad passes or the back pay owed them. The Chinese finally had no choice but to return to work, which kept wages low and the coal flowing from the mines. Read more at The Rock Springs Massacre.

The second event, though it involved no overt violence, brought to Wyoming the results of a national policy based on race hatred and fear:

From 1942 through most of 1945, about 10,000 Japanese-Americans from the West Coast of United States lived behind barbed wire in tarpaper barracks at the Heart Mountain Relocation Center between Cody and Powell, Wyo., in Park County—one of ten such camps around the nation during World War II. The center was briefly Wyoming’s third-largest town. When hundreds of young men in the camp were drafted into the U.S. military, 63 resisted, feeling they had been denied their constitutional rights. They and seven more leaders of the group were sentenced to federal prison. In the 1980s, Congress passed a law granting an apology and $20,000 to every survivor of the camps. Find more on that story at A Brief History of Heart Mountain Relocation Center.

With these events in mind, let’s hope we will continue to earn the Equality State nickname as the decades pass.