By Tom Rea
(Editor’s note: Tom Rea’s article “The Flight of the Utes,” was published this week on WyoHistory.org)

The past may seem dusty, distant, even irrelevant at times, until you hear the voices of people who lived through it. Fortunately, those tones survive in the things people wrote down. Personal letters are full of the tones of people’s voices but so, sometimes, are more formal documents, even government reports—and so are newspapers. 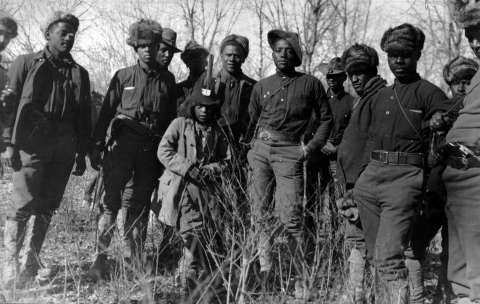 In the last decade or two, thanks to publicly funded, state-level efforts like the Wyoming Digital Newspapers Collection and private subscription efforts like Newspapers.com, scholars and the public now have huge resources available to them, and can find in a day or two sources that earlier would have taken weeks of time and miles of travel to access in far-flung archives. It makes a big difference in the history that gets written.

A couple of years ago, Greg Nickerson, who has written for WyoHistory.org on a variety of Native American topics, mentioned to me a story I’d never heard of: A band of several hundred Ute Indians with a large horse herd left their reservation in Utah and came across Wyoming in 1906. They hoped to find welcome and a better life on the Crow, Cheyenne or Sioux reservations of Montana and South Dakota. Greg didn’t have time to research the topic further, but he did steer me to an article about it from the Utah Historical Quarterly in 1968. I thought, well, with that plus what we can now find in newspaper databases, maybe we could bring something new to a topic that still was not well known.

And that turned out to be the case. What started out as a story about desperate people leaving a barren place made worse for them by U.S. government policy—their reservation—became also a story about Wyoming’s attitudes toward those people. Those attitudes are pretty plain in the newspapers.

In the offhandedly racist language of the time, the newspapers called the Utes “redskins,” “savages” and “red devils.” Ute children, men and women were “papooses,” “bucks” and “squaws.” The slightest provocation might set them on the “war path,” and the result would be a “bloodbath.” And the papers published—or who knows? invented—the wildest rumors that came to them: That the Utes were slaughtering sheep and cattle; that they had killed five cowboys when raiding a beef herd; that they were about to link up with the Cheyennes, “bad fighters” who “can muster 500 fighting men;” that they clashed with cavalry in a skirmish that left one trooper and three Utes dead.

None of these reports were true, but all spread a very real alarm across the state. One newspaper we found, the Gillette News, was sympathetic to the Utes in its reports. Twelve others were not. The papers tell us very little about the perspective of the Utes, but they show a great deal about conflicting fears, rage and guilt among the people of Wyoming. It’s an important story, and thanks to these new databases, it can now be much more thoroughly told.