Gillette, Christine Scoggan. A Story Nearly Told: Histories of a Wyoming Homestead. Self-published 2020, 322 pages. $25.00 paperback. Charles and Mary Spencer, the author’s great-grand parents, moved from their farm near Traverse City, Mich., to Wyoming by train on Memorial Day 1910. There they filed on a homestead and started a ranch about seven miles west of Upton, Wyo., in Weston County. Two of their five children, along with later generations, wrote of their experiences, providing abundant information for this family saga. 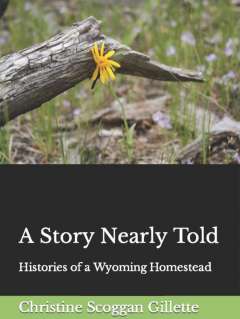 Their daughter, Fern, wrote, “As we got into the West, the country became really different—no trees or water, acres and acres of land, and an endless expanse of sky. … Our father and one of the boys were to leave on a freight railroad car, about ten days before we did, and take the household furniture, farm machinery, two horses, a cow, [and] chickens.”

Over the years, the family raised cattle and sheep; and the first few generations of women taught school to bring in more money.

The author writes, “Mary Spencer’s rosewood piano made the trip with them. … While the treasured instrument stayed largely in the crate for protection during the construction of the new house, the family did uncover the keyboard so that it could still be played. … ‘The Old Rosewood Piano’ was as much a presence in the homestead as any other member of the family.” The story of this piano reveals a distinctive trait of the Spencer clan, their love of music, passed down through the generations.

Floyd, one of Fern’s brothers, wrote, “Many an evening it had played a part in driving away our cares and worries after a hard and discouraging day” while construction on the first ranch house was progressing. Floyd resumes, “It … helped to hold the family together, and had given all of us children an appreciation of music.”

Eventually the family built a cabin, intended to be the permanent ranch home. Richard Spencer Dumbrill, son of Fern and Harold Dumbrill, describes the view: “a beautiful, isolated, hard-to-get-to spot with a spectacular view of two mountain ranges.” The piano, moved to the cabin, was cherished and played for some decades, but gradually fell into disrepair, and mice got into it.

In 1980, to rehabilitate the piano, another Richard, and Ed Williams, his father, reconditioned it. They took it completely apart, cleaning up the interior, replacing all the internal parts, installing a mouse-proof cage and, finally, refinishing the case. The process began in 1980 and took more than a year. The cabin and land eventually became a vacation home, and as late as 2003, the piano, still in good shape, was being played.

For many years, Harold Ray Dumbrill, Fern’s husband, wrote verses, including love poems to his wife. The title of the book is a line from one of his verses. “It cannot be I’m growing old/My life a story nearly told,/ How close they seem just now to me/Those days of golden memory.” The poem ends with “You seem as young as then to me/More beautiful, if that could be;/The hair turns gray and hands grow cold/I can’t believe that hearts grow old.”

Lucille Dumbrill, the author’s great-aunt and owner of a sourdough starter that dates to a sheepherder’s wagon in 1889, has served the Wyoming State Historical Society for many years as board member and past president.

The book is available at amazon.com and at bookstores and museums around the state.

Editor’s note: As of now, our blog posts include occasional book reviews. If there is a book about Wyoming’s past you’d like to see reviewed, email us at editor@wyohistory.org.