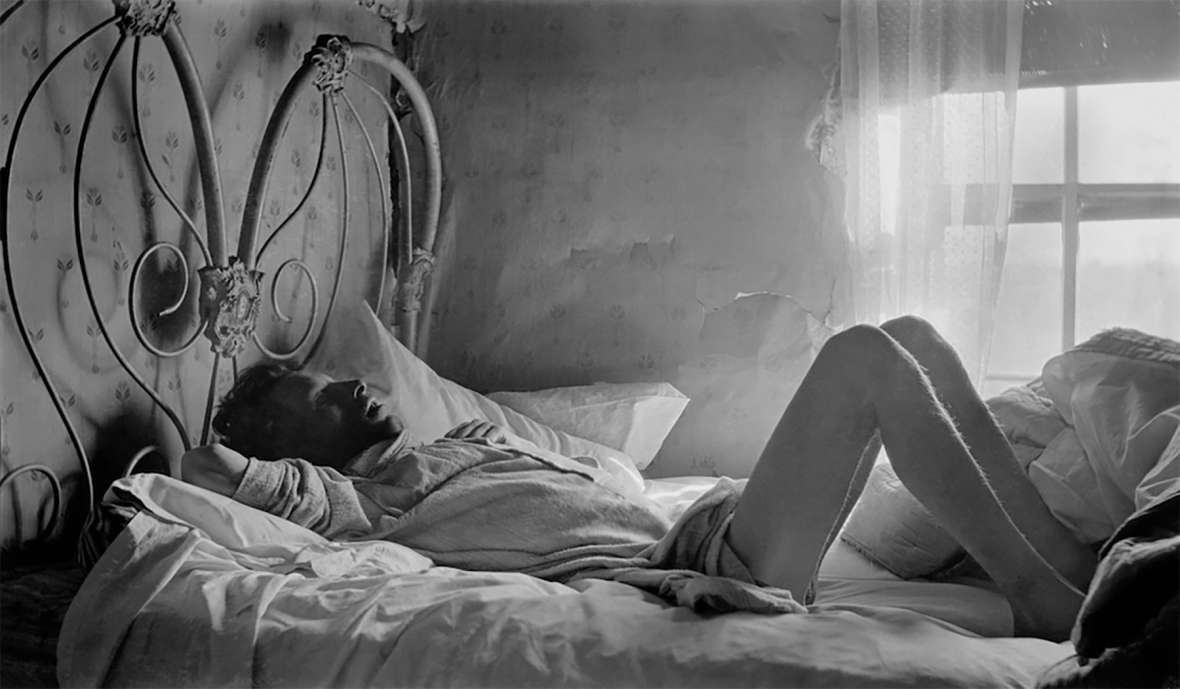 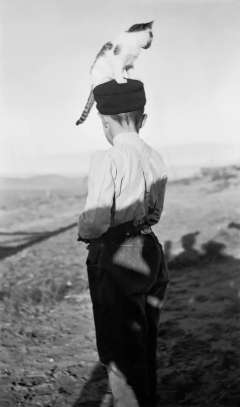 Lora Webb Nichols was a hard-working woman. Over the course of 50 years between the 1890s and the 1940s, she created a body of photography 24,000 images strong, most of which feature the life and times of her hometown, Encampment, Wyo.

These images—which capture the town and its people with arresting grace—languished in obscurity for decades. Nancy Anderson, a local historian with the Grand Encampment Museum, however, recognized the collection’s worth. She stored the negatives in the freezer.

In 2012, a California fine-art photographer named Nicole Jean Hill stumbled upon the archive while staying at Brush Creek, a nearby guest ranch, as an artist in residence. She became transfixed. After nine years of collaboration with Anderson and the museum — and after poring over voluminous diaries Nichols kept her whole life — Hill produced the first print volume of Nichols’s work, “Encampment, Wyoming: Selections from the Lora Webb Nichols Archive, 1899-1948.”

Released this year by Netherlands-based Fw:Books, it is the finest collection of Wyoming photography published this century.

In addition to creating tens of thousands of photographs, Nichols was a dogged businesswoman. Given a camera at the age of 16 by a suitor, whom she married and had two children with, Nichols began her photography practice with subjects many teens today post to Instagram—pets, friends, camping trips. But as her husband failed to provide adequate income, drifting from job to job, Nichols took advantage of the thriving local economy.

Encampment was in the midst of a copper boom at the turn of the 20th century. Nichols found work making photographs for mining companies and shooting portraits for tourists. The copper mines played out around 1911, the same year Nichols finalized her first divorce. But she succeeded where many in Wyoming’s history have suffered defeat—she shepherded her business through a bust, and even managed to grow it. Nichols opened an official Kodak storefront, Rocky Mountain Studios, in 1926, where she developed film and sold cameras. She also ran a soda fountain, the Sugar Bowl, next door. By this time she was married to another deadbeat, raising six kids, and relying on photography to make ends meet.

Nichols’s work life and shaky finances make her distinct in the history of women photographers. As Hill writes in an afterword to the book, “Lora does not fit the usual narrative of female photographers from this era, which commonly places cameras in the hands of wealthy women who pursued the medium as a pastime. Lora was an entrepreneur who used photography to provide a level of financial stability for herself and her family.” 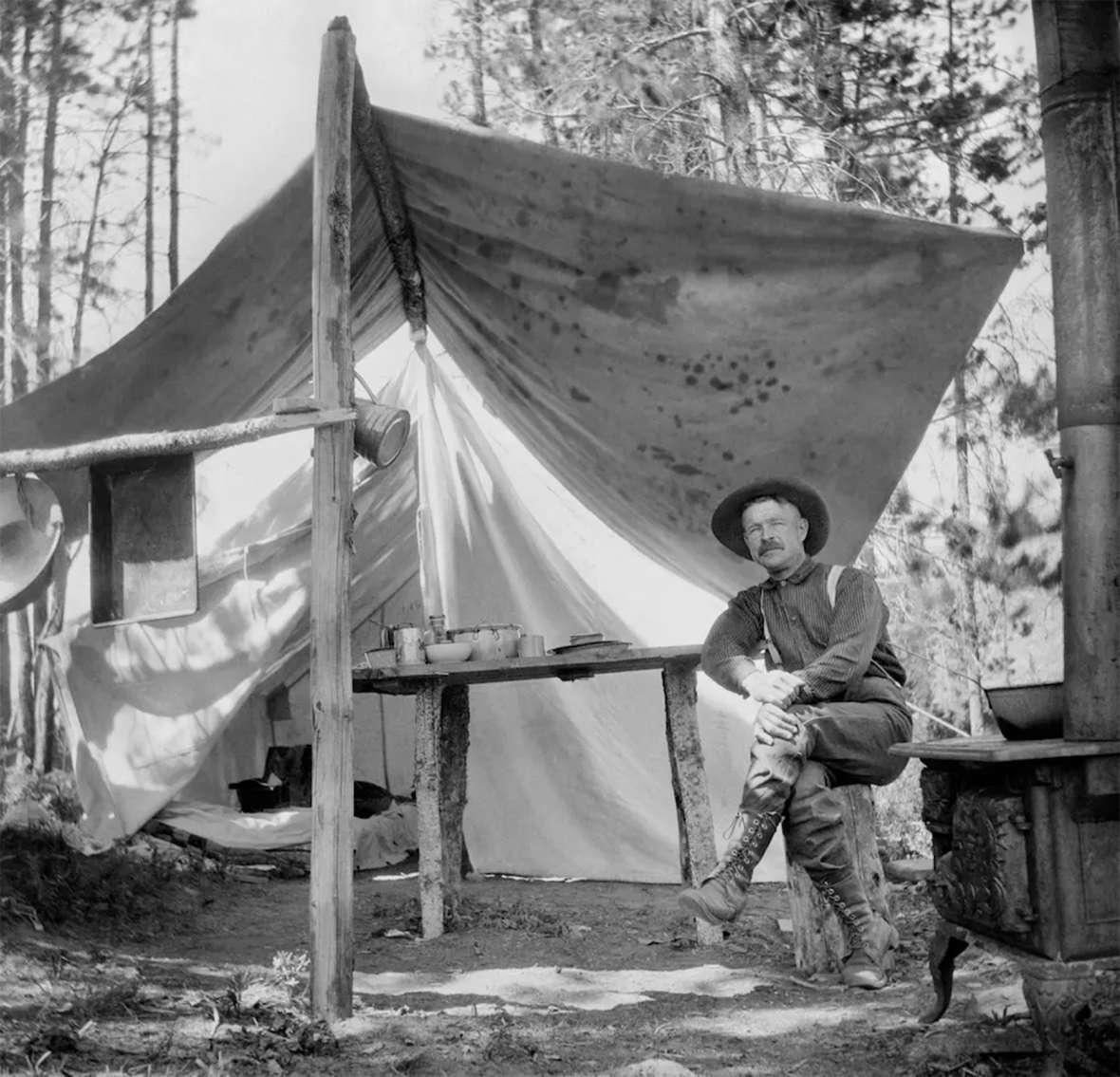 In a presentation last winter hosted by San Francisco art gallery SF Camerawork, Hill pointed to Nichols’s contemporary, Evelyn Cameron, for comparison. Cameron, Hill said, was a typical female photographer of the time, a scion of Eastern wealth relocated to Montana, where she placed her children in the care of nannies while photographing her well-coiffed peers. Nichols, in contrast, produced far more intimate images, of grooming, child rearing, illness and domestic work. When Nichols photographed her peers, they were fellow service industry workers at the nearby ranches, where she cooked and washed dishes when income from her various enterprises fell short.

The documentary aspect of “Encampment, Wyoming” alone makes it exceptional. It is a revisionist visual history of the American West — a female working-class view of an era typically portrayed by well-to-do artists and romanticized for its male grit. 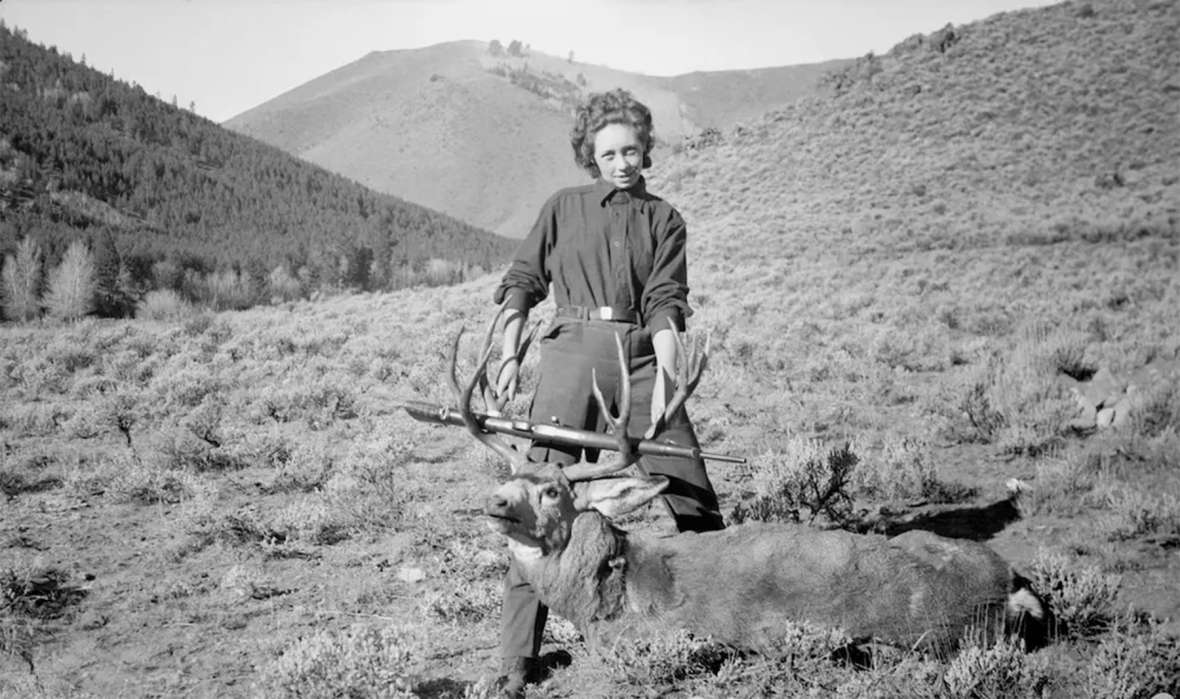 But the book is not merely a documentary catalogue. The beauty of its artworks elevates it beyond a standard collection of historical Wyoming photographs.

Nichols learned the formal aspects of photography via magazine articles, correspondence and radio shows. She was otherwise self-taught. Nevertheless, her talent is abundant.

Hill writes in the afterword, “Even her earliest portraits from 1899 present her close friends and family members with a stoicism and grace that makes it hard to believe they were taken by a 16-year-old learning an involved craft in relative isolation on the Western frontier.” 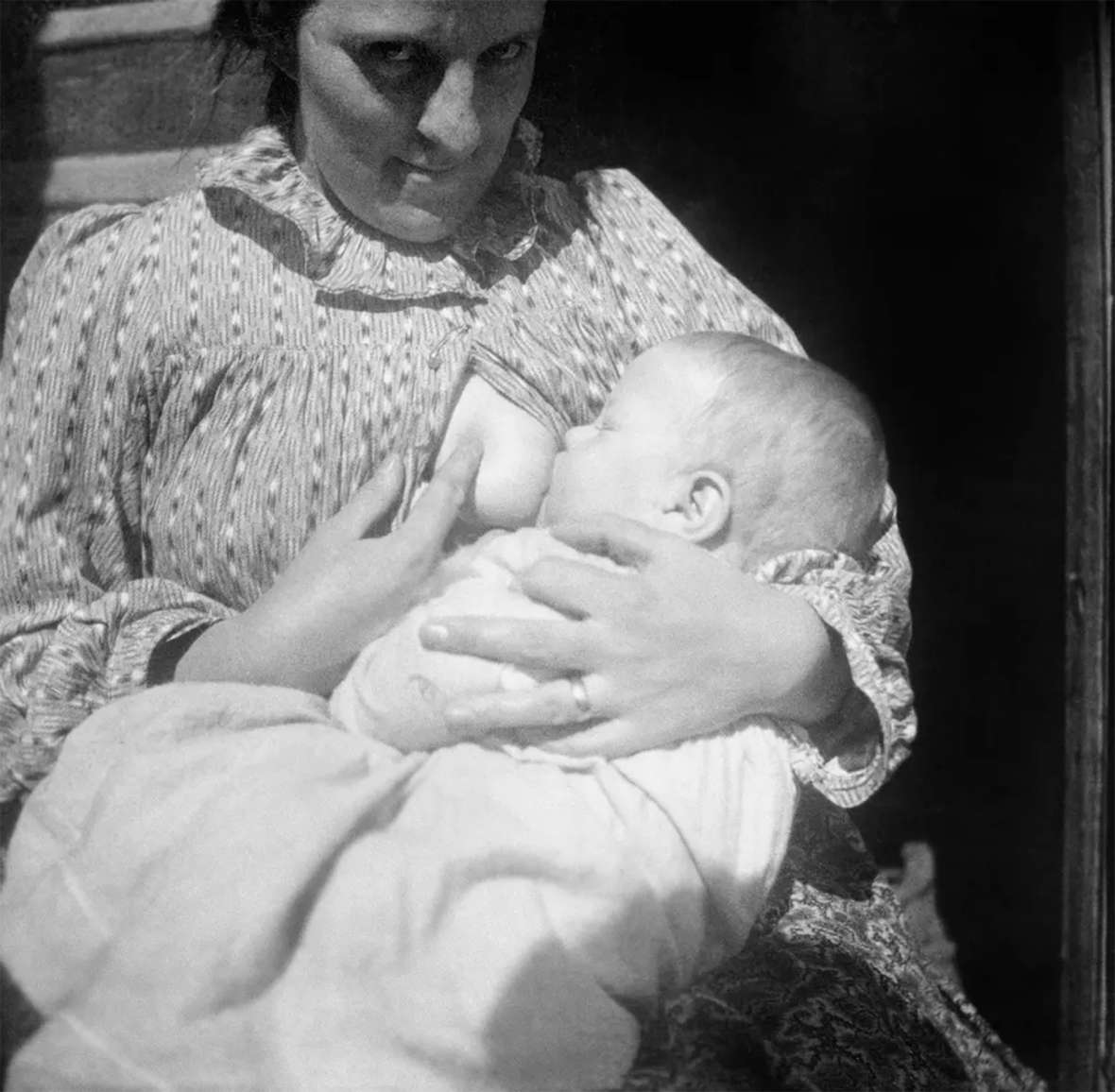 Most of the pictures in the book are portraits. Their quality lies in the bare moments of humanity they expose — the miner covered in grime stealing a nap on his feet, a mother’s knowing and scandalous glance as Nichols photographs her breastfeeding, a quarantined friend who looks comforted and calmed by Nichols’s presence. There are pictures of levity, strangeness, and joy — a man sharing a meal with a chipmunk, a child with a cat on his head. Even the portraits of rugged cowboys seem emotionally complex.

“Encampment, Wyoming” is shot through with photographs of stylish and badass women. Part of what captivates Hill about Nichols’s work, she said, is how contemporary it feels, in contrast to other photographs of the time whose subjects appear staid and stiff. 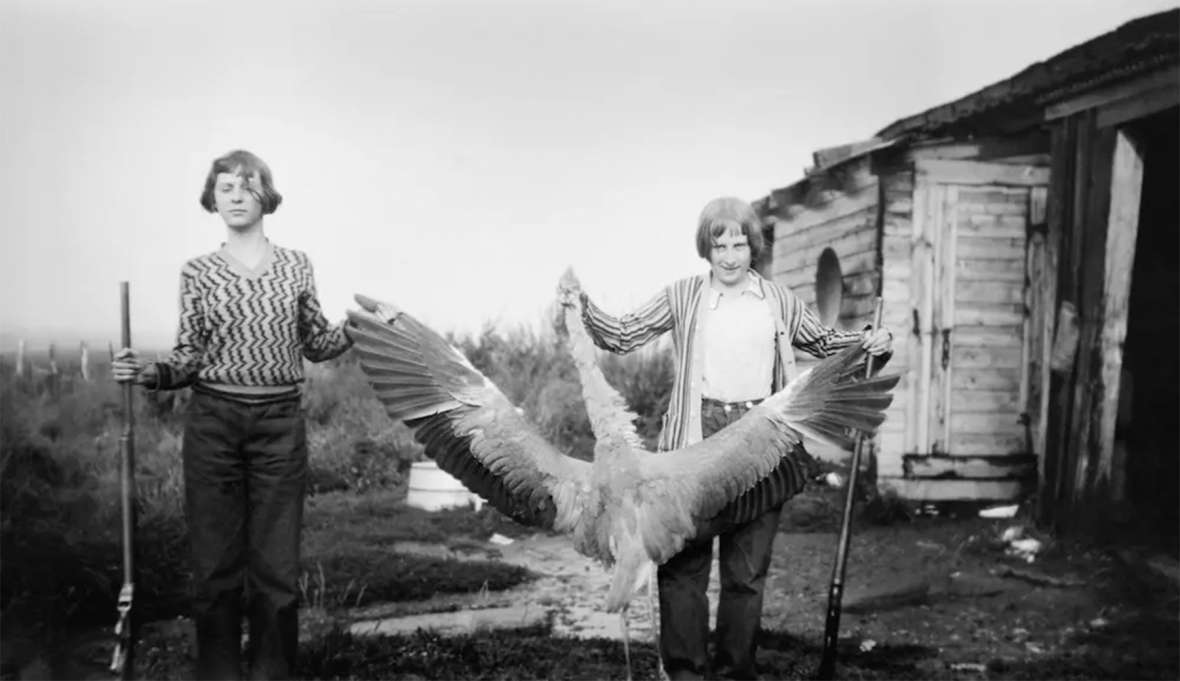 One striking image shows two young women in patterned V-neck and cardigan sweaters that would fly off the racks at Buffalo Exchange — but instead of posing in a Denver boutique, these women are holding shotguns and their quarry, a magnificent sandhill crane with wings splayed wide. In another, a young woman has pushed up her shirtsleeves like Rosie the Riveter, but instead of flexing her bicep, she’s stuck a rifle through the horns of her trophy mule deer buck as she presents it to the camera, a swashbuckling huntress. 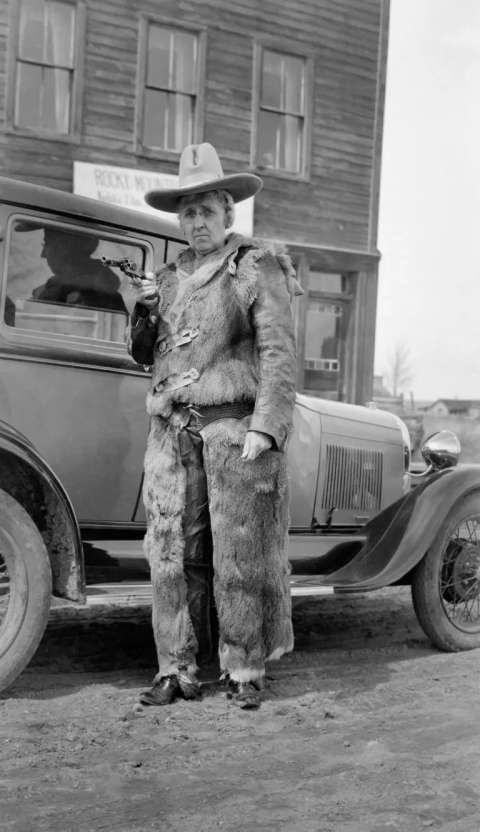 None of these young ladies holds a candle, however, to their elder, Harriet Eckerson, photographed by Nichols in 1929 on the streets of Encampment with a Model-T and a six-shooter, wearing an ill-fitting 10-gallon hat, pearl earrings, librarian glasses, and fur-on buckskin vest and chaps. Aside from looking incredible, Eckerson’s vibe reflects Encampment in that moment: caught somewhere between the frontier and modernity, awkward but nevertheless pulling it off, a mashup of rural Western fashion on a woman who might shoot you or bake you a pie.

The selection of images in “Encampment, Wyoming” represents a tiny fraction of the Lora Webb Nichols archive, which thanks to Hill’s efforts is now housed at the University of Wyoming’s American Heritage Center.

Hill said she chose photos for the book according to one abiding principle: She wanted to create an alluring visual array that would entice viewers to delve further into Nichols’s work.

And those who would never shell out $65 for a slick photo book can nevertheless experience the beautiful object in print. The Wyoming Community Foundation helped fund Hill’s book project on the condition that every public library in the state receive a copy. In addition, an exhibition of photos from “Encampment, Wyoming,” which debuted at Blue Sky Gallery in Portland, is on display at the Grand Encampment Museum through Sept. 6. It will then proceed to Western Wyoming Community College in Rock Springs, and it is scheduled to travel to Budapest, Hungary, in 2022.

Toward middle age, Nichols realized what many talented Wyoming women do: that most good-paying jobs here are men’s jobs, and she could make a much better living outside the state. Nichols moved to California, sans husband, in her early 50s following decades of near-poverty in Encampment despite her intelligence, work ethic and entrepreneurship.

“Lora redefined herself in California,” Hill writes in her afterword. “After stumbling through brief caretaking jobs in various homes, she found long-term work as a caretaker, and eventually supervisor, of a children’s home. Lora managed to buy property and establish the financial stability she always lacked in Wyoming.”

If Nichols’s photographs seem contemporary, so, too, does this narrative. Our state has yet to learn how to keep its creative and skillful people from fleeing. Wyoming should certainly champion Lora Webb Nichols’s work today, 60 years after her death, as an exquisite example of homegrown talent. But we would also do better to support our artists today, before they leave for the coasts.

Special thanks the author and the editors at WyoFile, where this essay was published July 15, 2021.

For more on WyoHistory.org on Lora Nichols and her times, plus 18 more photographs from her collections, see
Lora Webb Nichols: An Eye on Early Wyoming