Prominent on the front page of the Casper Daily Press on October 10, 1918, were two text boxes packed with advice. One listed ways to avoid the flu; a second listed steps to take if you got it: “Avoid contact with other people, especially crowds indoors . . . Sleep and work in clean, fresh air. . . . Keep your hands clean and keep them out of your mouth. . . . “ 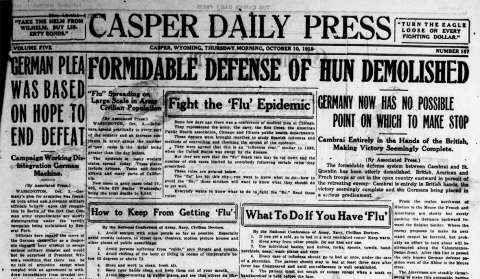 The paper’s tone was calm and upbeat, but it was a scary time. As of this writing, the number of new coronavirus cases in the United States and Wyoming continues to rise fast; Wyoming oficials reported the state’s first death this week.

In October 1918 things were far worse. That month alone, 195,000 Americans died of the flu. Before the epidemic ended the following year, more than 50 million people would die from the disease worldwide.

In Wyoming, 780 people died. By comparison, about 450 of our servicemen died in World War I. If a similar proportion of our state population died now as died then from the flu, about 2,340 would lose their lives. Then as now, people wore face masks in public. Churches and movie theaters closed their doors. Schools and the University of Wyoming closed for the rest of the term. Sound familiar?

Finally, the Daily Press advised, “Don’t worry, and keep your feet warm.” If that seems oddly lighthearted, remember people believed cold, wet feet led to colds, which led to flu, which could be deadly. Across Wyoming, physicians are saying something similar: Stay home, stay calm, stay safe and stay in touch with friends and family.