In January 1924, Ethel Waxham Love’s sister, Faith, wrote to her from Denver to express her concern for Ethel’s welfare. Fourteen years before, Ethel had married John Love, a sheep rancher in central Wyoming. 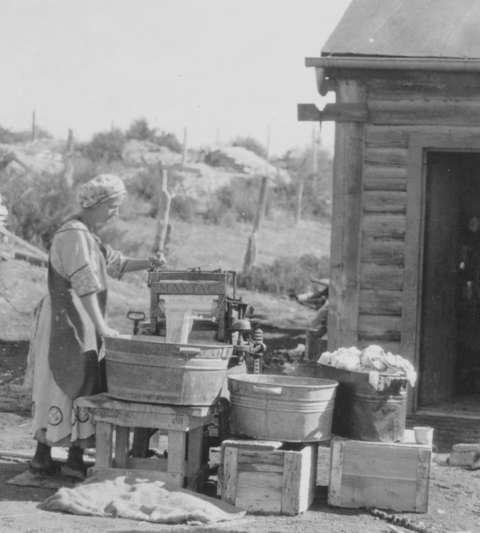 “I could not see you leave the ranch soon enough,” wrote Faith. “What would you think of a man who would take me off to a desert where I saw few people, who promised I should never work & who made me his slave body & soul. … You have never complained.”

They could agree on the last part, at least; Ethel never said or wrote to anyone about wanting to leave the ranch or her marriage. Before marrying John Love, Ethel had known about some of the hardships of sheep and cattle ranching in Wyoming. When Love wrote to her during the five years he courted her by correspondence, he never withheld news about how many sheep the latest blizzard had killed.

Faith continued,  “It is John’s duty to realize his responsibility [to support Ethel and their two young sons], and … he should be made to feel that responsibility. … What does John do? How does he earn a livelihood for his family?”

Only two years before, in spring 1922 after a hard winter that killed sheep and cattle all over the range, John and their two sons Allan and David, were forced into the “low class” activity of wool pulling—removing wool from sheep carcasses in various stages of decay. It was smelly, messy work and, when the boys complained, John answered, “Twelve years ago I owned our ranch and nearly a million dollars’ worth of livestock, all earned by my own labors. ...Twice since then, Nature has wiped me out. … Nearly all our cattle died two years ago, and before they died they ate three thousand dollars’ worth of feed. The bank is threatening to take the ranch to pay for the debt.”

Ethel’s story has inspired me to whine less, and to ponder what it took to survive on the Love ranch, especially through the severe winter of 1919-1920, when John and David had the Spanish influenza. Ethel and Allan—then 8 years old—did all the work plus nursing the invalids, the whole a crushing, protracted load.

In addition, I have encountered a version of Faith’s implied attitude, “Why doesn’t John work harder?” After I met my husband—an Oklahoma dry-land farmer—city women began telling me, “Farmers are bums.” We lived in tiny Tecumseh, in eastern Nebraska farming country, at the time.

Faith’s was a similar prejudice. She couldn’t imagine the make-or-break role weather plays in agriculture and in the lives of its people—or why a responsible man would be willing to risk so much. It’s a cultural divide.