Beethoven, My Cello and a Wildfire

Beethoven, My Cello and a Wildfire

By Rebecca Hein
Editor’s note: Rebecca Hein’s article, “Beethoven’s Birthday in Wyoming,” about two concerts celebrating the 200th anniversary of the composer’s birth, was published on WyoHistory.org this week.

December 2020 is the 250th anniversary of Beethoven’s birth. Wyoming orchestras planned celebrations this year, but they were disrupted by COVID-19. The (Casper) Wyoming Symphony and Cheyenne Symphony both programmed a Beethoven work for every concert, but many had to be canceled or delayed. The Powder River Symphony, in Gillette, attempting to present live performances, could not put a full orchestra on stage. On the 200th anniversary in 1970, however, two civic orchestras performed Beethoven. 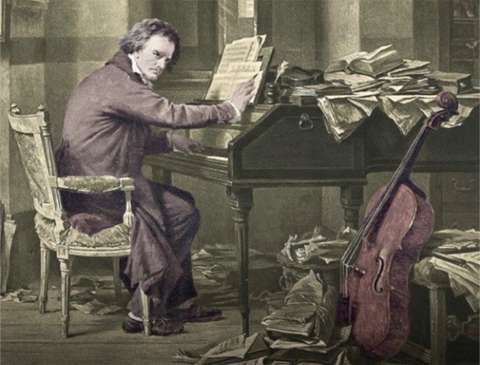 Growing up in Wyoming, I had few chances to attend professional concerts in Casper, but by 15, I was playing in the Casper Civic Symphony and Casper Youth Symphony. Beethoven’s music was a magnet pulling me into the practice room, two to six hours a day from ages 16 to 27. Later, I confined my reduced practice hours to my schedule as a professional cello teacher and performer.

Even better, throughout my first two high school years, I joined three friends to play string quartets for fun every Sunday afternoon. Many of Beethoven’s early, and some middle, works are accessible to community groups and hardworking students.

So every week, we played at least one of the six Op.18 quartets plus Op. 59, no.1. This opens with a simple, beautiful melody for the cello that I never tired of playing. On the contrary, I traveled further in. My high school chamber music partners were all a year older than I, but I don’t remember anything lacking in my own senior year because I was already stuffing in as much practicing as I could, fired by my dream to spend my life with the cello in my hands.

At 19, on full scholarship to the Congress of Strings at the University of Washington in Seattle, I got to work on the Op. 95 “Serioso” quartet, a late middle work. It is abbreviated compared to Beethoven’s other works up to that time, but I sensed that for every phrase he excluded, he added a corresponding degree of passion. It also sounded to me like he was transforming all the misery his life circumstances forced on him into gold for all of us.

By 26, I’d performed every symphony at least once, including the Ninth. Every cellist who auditions for even a minor professional orchestra must learn the opening to the finale, so I practiced it until it was part of me. In this passage, the cello and bass sections play long extended sections in unison, a perilous situation where imperfections show. Nonetheless, I became comfortable enough after a few performances to notice what was to come: the choir and four vocal soloists soon to stand up and sing.

My latest encounter with Beethoven occurred in August 2006, not in the concert hall but within my soul. For days the Jackson Canyon fire had been raging just beyond our view from a valley at the west end of Casper Mountain, where we had a building in progress. We’d been preparing to evacuate, and when the flames burst over the east ridge, in a single “whoosh” they lit up every tree on top of the horseshoe curve cradling our valley. The fire spread fast down the tree-covered slope.

Our two children had climbed into our minivan and fastened their seat belts, and I was about to do the same when I heard a roaring sound. Turning, I saw it was the fire, but in its power and majesty, I felt something else: a choir standing in ranks and ranks on risers, vibrating with Beethoven’s celebration of Schiller’s “Ode to Joy.”