Wyoming’s Pathfinder Dam was named for the explorer John C. Fremont, “the great pathfinder,” but the name could apply as well to the engineering trail blazed there in the early years of the Bureau of Reclamation. When completed in 1909 on the North Platte River, 47 miles southwest of Casper, Pathfinder Dam was a triumph of early 20th century design. 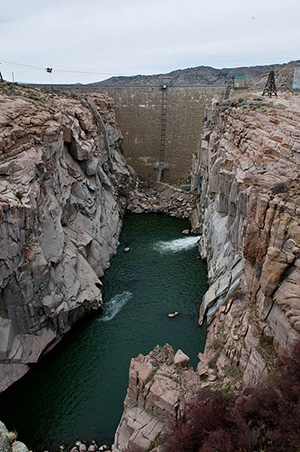 Wedged into a remote canyon near the place where the Sweetwater River empties into the North Platte, Pathfinder stands 214 feet high, an arch dam measuring 97 feet thick at its base but only 11 feet wide at its top. Built from granite quarried from nearby hills, Pathfinder’s crest stretches 432 feet from craggy rim to craggy rim, its face laid in large rectangular blocks.

Pathfinder Dam is one of the first constructed by the brand new U.S. Reclamation Service (today’s Bureau of Reclamation), created to administer the Reclamation Act of 1902, which committed the Federal Government to build irrigation works--dams, canals and reservoirs--in 16 arid and semi-arid states of the American West.

Long before there was a Reclamation Service, homesteaders on the North Platte River in western Nebraska and eastern Wyoming did their best to irrigate this sagebrush country. In the 1880s, as historian Robert Autobee writes, they dug small ditches and built water wheels to bring the North Platte to their homesteads near the river. Cattlemen, as well, dug a series of small canals to irrigate tracts along the bottomlands.

Near Nebraska’s state line with Wyoming, private companies made repeated surveys for a large irrigation project, including a dam, but costs proved prohibitive. When the U.S. Reclamation Service was established in 1902, the government began studying the region as well, but focused on the Sweetwater River, a North Platte tributary southwest of Casper. When it was determined that the Sweetwater did not supply enough water to justify a dam, Reclamation turned to a site on the North Platte, three miles below its junction with the Sweetwater. The dam would impound water from both rivers.

The first bids were let in February 1905. By that August, a tunnel, built through solid granite, was complete. The tunnel diverted the river around the dam site so construction could commence; once the dam was built, the tunnel would serve as an outlet from the reservoir.

Even before engineer George Y. Wisner investigated the site for Pathfinder Dam, he argued that Reclamation needed to build masonry dams of great height if their reservoirs were going to be able to store adequate water to serve the parched lands of the American West. But the higher the dam and the more water stored behind it meant, of course, greater pressure on the dam.

While an arch dam made sense in Pathfinder’s steep, narrow canyon, Wisner and fellow engineer Edgar T. Wheeler worried about Wyoming’s high elevation and harsh weather. The thin upper arch needed extra protection, the engineers thought, or it might crack. Wisner and Wheeler designed an arch dam, but did something new--they added a gravity section. Pathfinder would function as an arch and gravity dam combined, distributing the load between horizontal arches and vertical cantilevers. 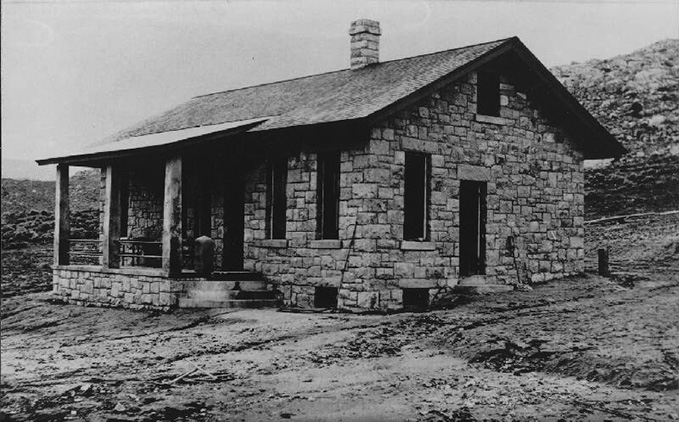 This method, which they called the “Arch-and-Crown Cantilever Method,” was the predecessor of the Bureau of Reclamation’s “Trial Load Method,” which would be used later in the construction of dams as big and as famous as Hoover. The method, Norman Smith writes in Man and Water: A History of Hydro-Technology, “put arch dam design on a much sounder footing.”

Pathfinder Dam and its Wyoming neighbor, Buffalo Bill Dam, completed on the Shoshone River a year later, were at the forefront of these ideas as the new Reclamation Service got its feet wet. The two dams were the first to be analyzed using the Arch-and-Crown Cantilever Method. In these early years, as historian David P. Billington writes, large dams appealed not only to designers like Wisner, but also to Reclamation’s top man, Frederick H. Newell. Newell wanted the West’s dams not only to appear safe, but also to serve as symbols of the Bureau of Reclamation’s ability “to accomplish great things.”

Because of its pioneering and innovative engineering role, Pathfinder Dam was listed on the National Register of Historic Places in 1971. The dam also is listed as a Wyoming Historic Civil Engineering Landmark.

Pathfinder Dam was constructed from hard, coarse-grained granite quarried within a quarter-mile of the dam site. As Autobee explains, pieces of rock 40 feet square were blown out of the canyon, then split into smaller blocks of 8 to 10 tons, cleaned, and placed into position on the dam by cables. To prevent leaks, concrete mortar filled the space between blocks.

The cement was hauled 47 miles from Casper by horse and wagon, no easy feat in a rugged land of valleys and hills where the mercury could plunge to 29 below zero. The fastest freight team made the trip in three days; the slowest in 76. “After a day’s work,” Autobee writes, “freight teams were unharnessed and turned loose on the range to feed, and frequently, many subsequent days were lost in search of wayward animals.”

All kinds of teams were used--from a sheep wagon drawn by two horses, to a mule carrying 24 sacks of cement, to a 22-horse team drawing five wagons loaded with 31,000 pounds of cement. The cement cost an average $2.68 a barrel, but the contractor paid an extra $3 for the journey to the dam. Pathfinder was so remote that after the dam was complete, the Denver contractor, Geddis and Seerie, left much of their equipment at the site rather than pay to haul it back to Casper and then ship it by rail to Denver.

Today, viewed from its downstream side, Pathfinder Dam looks much as it always has. As noted in its National Register nomination, Pathfinder Dam’s imposing height, with water cascading from its mid-level outlet tunnel, “is truly an awe inspiring structure – a monument to engineering ingenuity.” 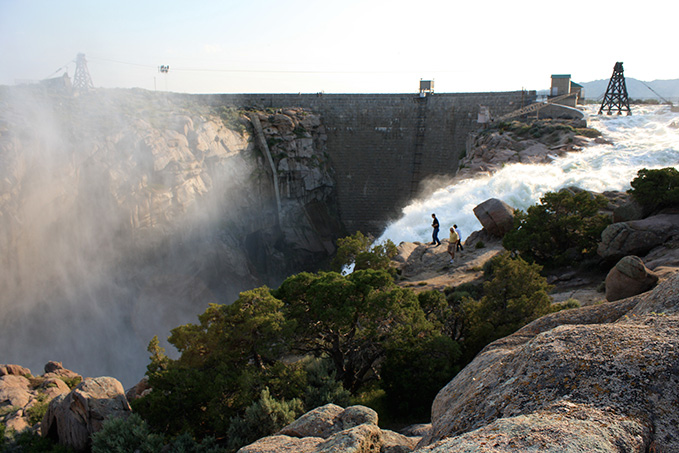 Pathfinder Dam, on the North Platte River 47 miles south of Casper, completed at a cost of $2.2 million.

Pathfinder Dam is on the North Platte River, 47 miles southwest of Casper, WY. From Casper, take Wyoming Highway 220 south and turn left onto Natrona County Rd. 409 (Pathfinder Road). A small interpretive center with exhibits about the dam is located in the old dam tender's house, and a 1.7-mile interpretive trail, which can be accessed by a historic, restored suspension bridge, offers views and information. Access to the top of the dam may be limited due to construction work on the spillway. To visit the interpretive center, open only by appointment, call Natrona County Parks and Trails at (307) 235-9325.