Boysen Dam was built in the 1940s across the Wind River at the upstream end of Wind River Canyon in Fremont County in central Wyoming. The dam was part of the massive federal Pick-Sloan Missouri Basin program to develop irrigation and hydropower by building dams on the Missouri River and its tributaries. Since its construction, Boysen Dam has stored water for local agricultural uses, generated electricity, and helped control damaging spring floods. 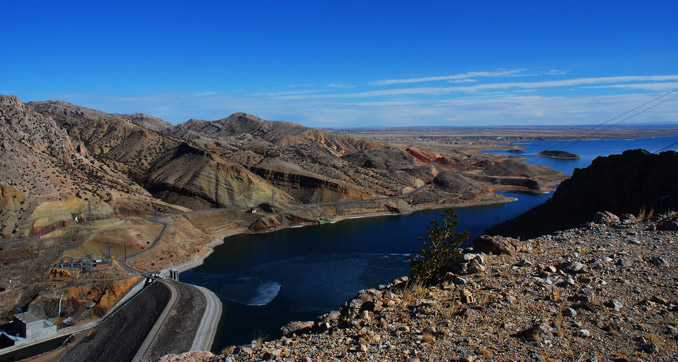 The Wind River rises in the mountain range of that name and flows north through the Owl Creek Mountains into the Bighorn Basin, where it takes the name Bighorn River. Wind River Canyon, the site of Boysen Dam, cuts down through the middle of the Owl Creeks in a geologic feature known as a superimposed stream.

Such gaps through hard rock ridges are fairly common along Wyoming rivers. The gaps were created when the streams flowed in channels hundreds of feet higher than they do today, above ridges of hard rock like the Owl Creeks that lay buried in looser sediment. Over time the river cut down through everything below it, slicing gaps through the ridges that still remain although the softer sediment has eroded away. Many Wyoming dams, such as Alcova and Pathfinder, have been built at sites with similar geologic features.

One of the requirements to claim a homestead under the 1877 Desert Land Act was irrigation. When the first homesteaders came into the Wind River area in the 1890s, many of them made at least a token attempt to draw water from the river or its tributaries. Often this was simply done to prove up on a claim, but ranchers along the river also used the water for growing feed or irrigating pasture land for livestock.

Before Boysen Dam was built, damaging floods sometimes occurred along the Wind/Bighorn River each spring and low flows were common during summer and fall. Snowpack accumulated in the mountains over the winter and melted quickly in the spring. Hot summer weather dried the river to a trickle. The Basin Republican described a Bighorn River flood that came through Basin, Wyo., in March 1906:

[F]or three hours the citizens stood on the banks of the river and watched a scene which beggars description. The river was more than bank full and great cakes of ice were forced out on either side. . .the great mass, miles in extent, moved majestically down the stream, as a great serpent wending its way with ponderous force.

The paper reported that the flood destroyed a new. $10,000 steel bridge and completely submerged a ranch house on the far side of the river. Only the stovepipe was visible above the water. 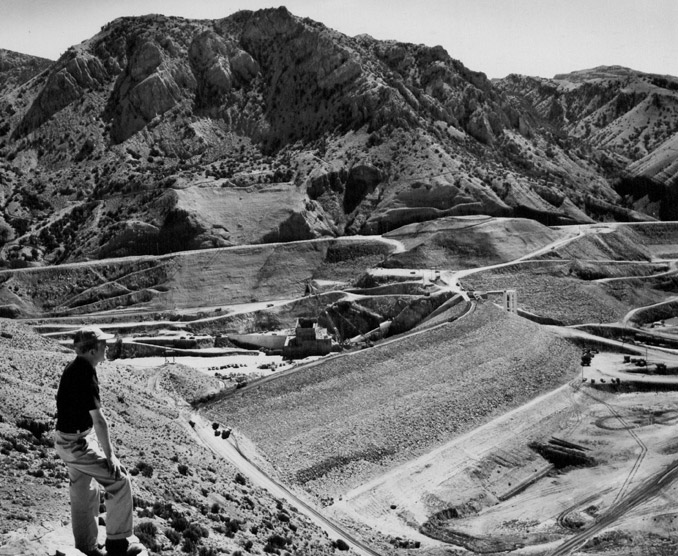 The idea for a large, federally funded dam on the Wind River, to be used for flood control and water storage, was proposed repeatedly during the 1930s and 1940s by the U.S. Army Corps of Engineers and the Bureau of Reclamation. Boysen Dam was authorized in 1944 and named for businessman Asmus Boysen who had built a small concrete dam across the river for hydropower in 1908.

The idea for Boysen Dam was well received by locals. Thermopolis resident Sig Harrison mentioned the upcoming construction of Boysen Dam among other reasons why "future prospects are brighter here than for many years," in a 1944 letter to service members published in the Hot Springs County News.

The first steps in construction were to raise sections of east-west-running U.S. Highway 20 and the tracks of the east-west-running Chicago and Northwestern Railroad to levels above the planned reservoir, and build a camp for the government and contractor employees. This preliminary work, which began in 1946 and took about a year to complete, was mostly contracted to Wyoming companies. A carpenter's strike, delays in deliveries of government supplied materials and winter weather caused some slowdowns in the work and boosted costs to more than $250,000 over the budgeted amount. 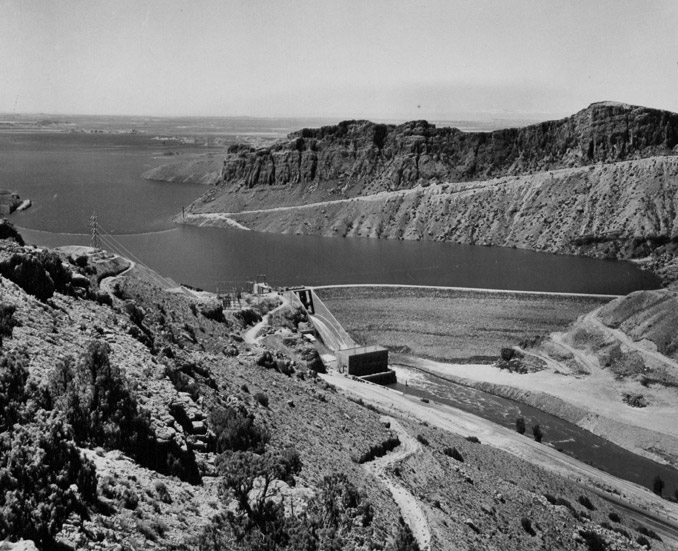 The contract for building the dam itself and moving tracks of the north-south-running Chicago, Burlington and Quincy Railroad was awarded to Morrison-Knudsen, an Idaho company. Work began in 1947 on excavation for the dam site and drilling in the canyon wall for the railroad tunnel. A rockslide destroyed part of the tunnel, and cold weather prevented concrete work, delaying the overall project. Total cost of constructing the dam and powerhouse was more than $18 million, some $4.5 million more than planned. Water storage began in October 1951, power generation began in August 1952, and the project was declared complete on Jan. 1, 1953.

Although no new irrigation projects were undertaken to deliver this extra water to crops and fields, the dam helped stabilize existing uses. The Riverton Unit, located upstream from Boysen, provides primarily agricultural irrigation and does not receive water from Boysen Reservoir. However, the reservoir helps ensure that downstream users are not affected by the activities of the Riverton Unit.

The reservoir also attracts people to Boysen State Park for recreation, and the power plant at the dam produces more than 37.8 million kilowatt-hours of electricity annually.

Boysen Dam is located about 17 miles south of Thermopolis, Wyo., on U.S. Highway 20. Boating and fishing are possible on the lake, and camping is available at Boysen State Park. In the Wind River Canyon, highway department signs highlight various geologic formations. For more information, visit http://wyoparks.state.wy.us/Site/SiteInfo.aspx?siteID=2.