Edison, the Light Bulb and the Eclipse of 1878

Edison, the Light Bulb and the Eclipse of 1878

Thomas Edison was 31 years old and already a famous inventor when he visited Wyoming Territory in 1878. He had patented the phonograph the previous year and the national press was calling him “Professor Edison” in recognition of his celebrated wizardry.

The inventor was working in his Menlo Park, N.J. laboratory when a friend asked him to join an expedition to view a total eclipse of the sun. Numerous prominent scientists and astronomers planned to make the journey to Wyoming where the eclipse could best be viewed. Edison decided to make the trip, led by noted astronomer Henry Draper, because he wanted to test one of his latest inventions, a tasimeter designed to measure small changes in temperature.

The Draper party arrived on the train in Rawlins, Wyo., on July 18, 1878. The small railroad town was already packed with scientists from throughout the world. Edison was fortunate to find a room in the only hotel, which he shared with other members of the Draper party. 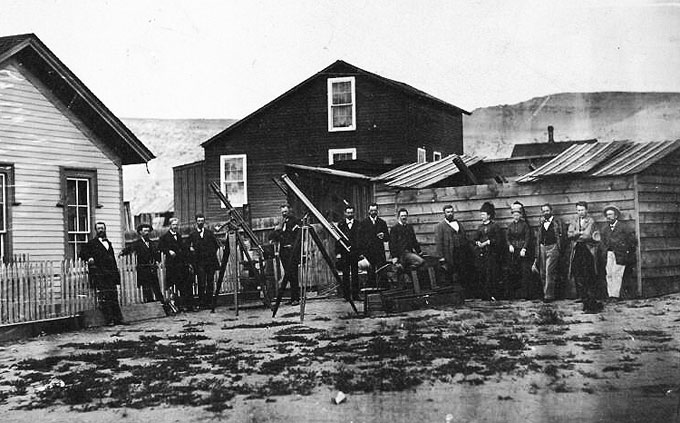 His first exposure to the West occurred late that night when he was paid a visit by an admiring stranger. Edison told the story years later: “After we retired and were asleep a thundering knock on the door awakened us. Upon opening the door, a tall, handsome man with flowing hair, dressed in Western style, entered the room. His eyes were bloodshot and he was somewhat inebriated. He introduced himself as ‘Texas Jack’….and he said he wanted to see Edison as he had read about me in the newspapers.”

The tipsy stranger proceeded to show the famous scientist his prowess with a revolver by shooting the weather vane off the depot across the street from the hotel.

After some pleading, Edison was able to get the man to leave, but he never forgot his first night in Wyoming.

The party spent the next 10 days preparing for the solar eclipse. When it came on July 29, Draper succeeded in his efforts to photograph the sun’s corona. Edison’s tasimeter experiment failed, however. The device was too sensitive for the extremes in temperature brought about during the event.

The next day the Draper party left for the East, but Edison and his friend Professor George Barker continued on to the West Coast.

Two weeks later, the two men returned to Rawlins for a week of fishing and hunting on Muddy Creek, 70 miles south of Rawlins. Accounts vary as to this part of Edison’s stay in the state.

A man who claimed to have accompanied the party recalled years later that Major T. T. Thornburgh was with the group. He said a messenger called Thornburgh away to join the White River expedition against the Ute tribe in Colorado, where the major was killed. The recollection is incorrect, however. Thornburgh did meet his death in that campaign, but it occurred well over a year after Edison’s fishing trip.

The same man remembered Edison telling Barker after he was asked how he slept: “I wasn’t thinking about resting. I lay and looked up at the beautiful stars and clear sky light and I invented an incandescent electric light.”

The recollection was reported more than 40 years after the event supposedly had occurred and is not substantiated by any other source. This statement probably was the basis for a tale that Edison invented the light bulb at Battle Lake. The story was embellished later with the assertion that he got the idea for the bulb when his bamboo fishing pole fell into the campfire, and the ends began to glow.

Historical evidence indicates that the story is simply a myth. Arc lighting had been successfully demonstrated at the Paris exposition that summer of 1878. Edison knew of these experiments, but it was more than a year after his Wyoming visit and after the expenditure of $40,000, that he came up with the solution to incandescent lighting.

His first successful light filament was not bamboo, but carbonized cotton thread. Bamboo was found to be a useful material for the filament six months later, after Edison tried about 6,000 other materials.

Even though Edison did not invent the light bulb along the shores of Battle Lake, he had a memorable trip. A Laramie newspaper reported: “Edison, the great inventor, Prof. Barker….returned from their trip to [Muddy Creek] today. They had a very pleasant hunt and fish, killing many elk, deer, antelope, etc., and bagging some 3,000 trout.”

Edison left Rawlins by train on Aug. 19, 1878. The happy fisherman was rested and ready to invent again.

Total solar eclipse viewed in Rawlins, Wyo. by a party including the inventor Thomas Edison and led by noted astronomer Henry Draper.