Women and World War I

Women and World War I 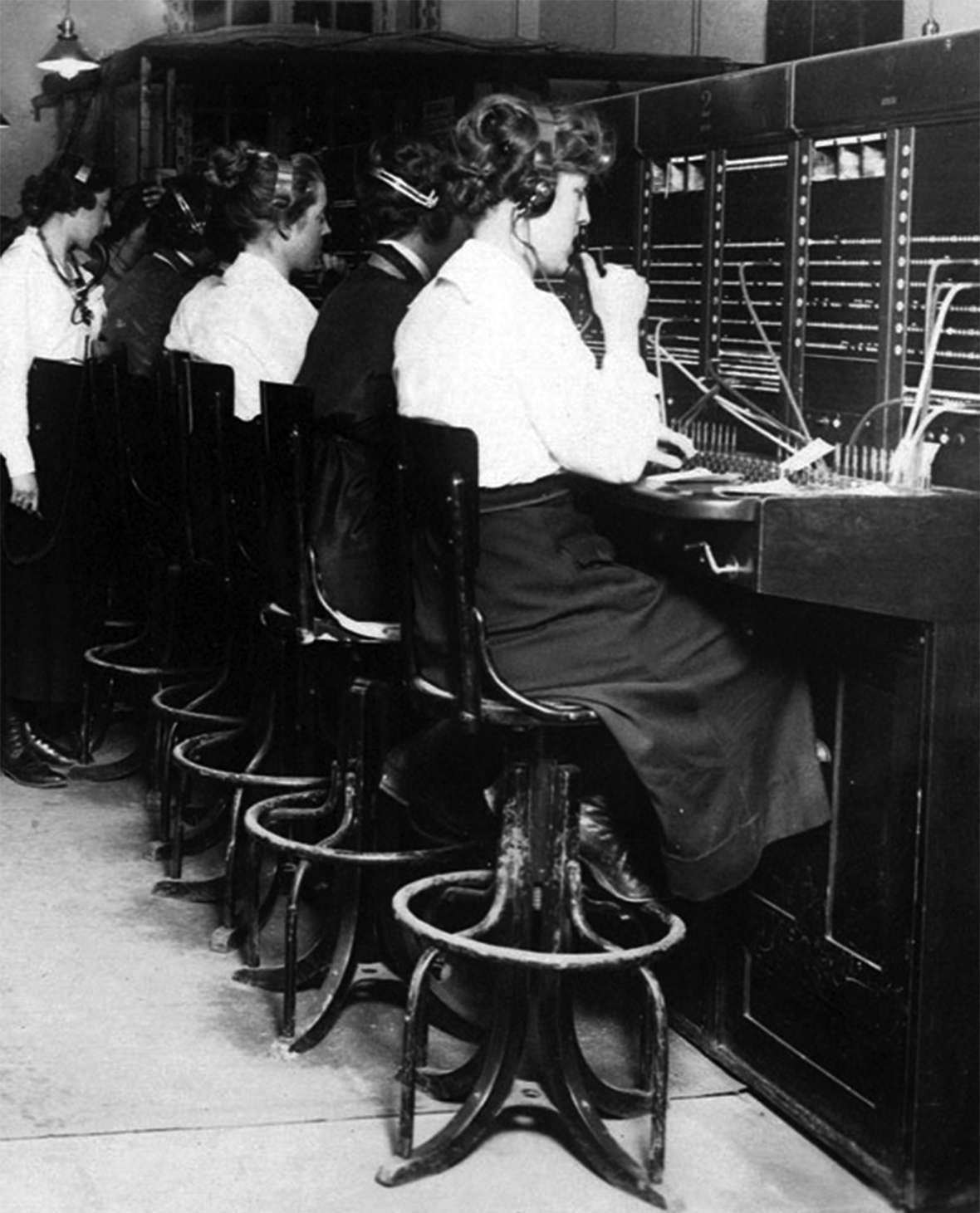 (Suggestion to teachers: You might want to discuss with students what Laurence Stallings’s long quote in the “Army Nurse Corps” section, below, reveals about general attitudes toward women among the generation of men who served in World War I.)

With the entry of the United States into the Great War, women stepped forward to serve their nation just as men did. Women served in a multitude of jobs and made immense contributions. Sixteen thousand American women served in the American Expeditionary Force (AEF) in France, where they worked as ambulance drivers, designed and manufactured camouflage netting and more.

In the United States, women operated radios and telephones, and served as code breakers. Although their assistance is nearly forgotten today, many thousands of women contributed to the war effort, paving the way for their massive participation in World War II. The contributions of women in war service also played a key role in their winning the right to vote nationwide in 1920. 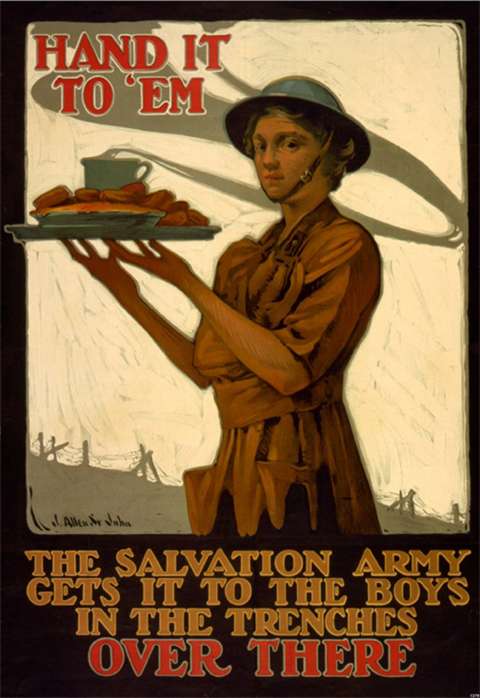 The Army Nurse Corps had been officially established in 1901, but at the commencement of the Great War, the Corps included only 403 active duty nurses. By 1919, that number had swelled to 21,480 nurses. About 10,000 served overseas. Army nurses were extremely popular with servicemen, as recorded in Lt. Laurence Stallings’s autobiography. Stallings, a Marine, was critically wounded at the Battle of Belleau Wood in June 1918. In a book published decades later, Stallings wrote:

“Doughboys were connoisseurs of hospitals. All of them had a favorite nurse, and loved her starchy neatness, her clear soft skin desperately, and not many had complaints. There were two sleepless Army nurses of true beauty in Base 65, Miss Hilda Laconius, a brunette with sapphire eyes, and Miss Milly Warren, a brown-eyed honey-blonde. [In early 1919] … the 190,000 of us in hospitals were beginning to be moved home, now that ocean transport was safe for men in heavy plaster. ... The American boxcars that housed our tiers of stretchers [when the wounded soldiers were on their way from the front to ports to ship home], three deep on either side of the aisle, were shockingly clean; and the Army nurses detailed to attend us must have been chosen for beauty as well as skill, so pretty and sweet-scented were they in winter’s blue capes … Someone in Tin Pan Alley had written a song about the Red Cross nurse being the ‘Rose of No-Man’s Land’ and back home people thought of Red Cross workers as being the sole custodians of the casualties. There were some in France, and devoted; but around-the-clock work was done by the U.S. Army nurse in her unsung thousands.”

When the Great War began in Europe in 1914, the American Red Cross performed humanitarian roles in Europe. When the U.S. entered the war in 1917, President Woodrow Wilson was the honorary chairman of the Red Cross, and he fostered a major involvement and expansion of the organization. The Red Cross established and operated 54 hospitals overseas. The Army and the Navy recruited 23,822 Red Cross nurses, in addition to the Army nurses numbered above. Many of the Red Cross nurses and well over 2,000 nurse’s aides, physicians and dieticians served in military and veterans’ hospitals. The Red Cross also played a major role in fighting the devastating 1918 Spanish influenza epidemic nationwide. 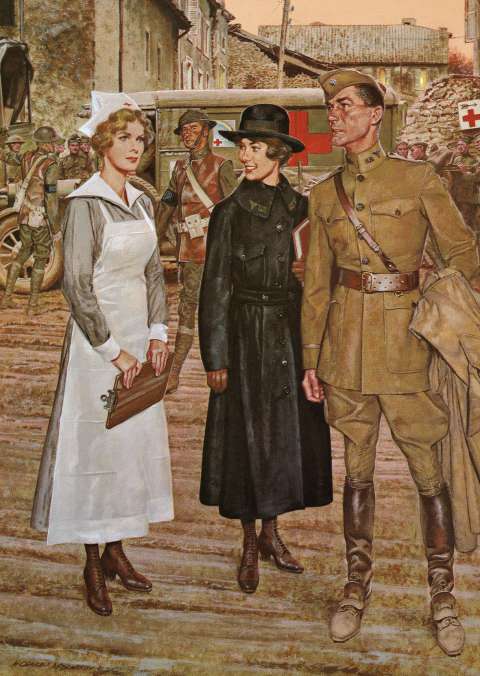 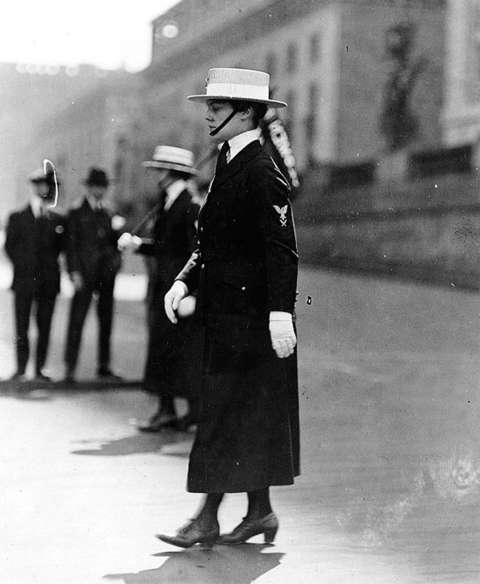 When the AEF arrived in France, American officers had considerable difficulties placing calls over the woefully antiquated French phone system through French operators. Gen. John Pershing’s solution was to recruit professionally trained, bilingual American female telephone operators to serve the AEF. Officers were ecstatic to reach American girls who could instantly and without confusion connect their telephone calls. These female switchboard operators shortly became informally known as “Hello Girls” for their distinctive greeting. By the end of the war, 223 women were serving overseas in this capacity, with another 109 serving on board ships. Seven “Hello Girls” received Distinguished Service Medals for refusing to leave their posts when their telephone center caught fire. “Hello Girls” wore dark-blue wool uniforms with white blouses and black ties, which had to be privately purchased. The “Hello Girls” were not formally enlisted in the U.S. Army; rather, they were considered to be civilian employees under contract to the Army.

The Naval Act of 1916 declared that the Naval Reserve would consist of “all persons who may be capable of performing special useful service ...” Women were not specifically excluded, and the U.S. Navy, facing manpower shortages, in March 1917 enlisted 11,274 “Navy Yeomen.” Twenty-four of these women were black. Yeoman is a naval rank; these women, nicknamed “yeomanettes,” primarily performed administrative and clerical jobs, although a few served as mechanics, truck drivers, cryptographers, telephone operators and munitions-makers.

Initially women’s uniforms were privately purchased and were not designated with specifics, other than the color white or blue and “naval in appearance.” Women’s uniform regulations were belatedly issued in 1919. The last female yeoman was discharged in March 1921. Many of the women accepted identical civilian positions with the Navy upon their military discharge. A majority of these women joined the American Legion, a nationwide veterans group, forming all-female or predominantly female posts in large cities.

One of the great stories of the American Expeditionary Force in World War I is that of the efforts by the Salvation Army to help make the American soldiers’ lives a little more comfortable in the mud, cold, wet and misery of the Great War. The Salvation Army deployed numerous civilian volunteer women and girls to France, and they cooked hundreds of thousands of doughnuts that were distributed to soldiers throughout the rear areas and trenches of the AEF in 1917-1918. In the U. S. Army during the war, there were few provisions made for the soldiers’ morale, welfare and recreation. The Salvation Army voluntarily strived to fill this void.

The Salvation Army Doughnut Dollies, also called Lassies, became famous for serving hot doughnuts and drinks to doughboys near the front lines. The Young Men’s Christian Association (YMCA), Red Cross and Salvation Army operated canteens for servicemen at home and overseas, with many of them staffed by women.

One soldier wrote home, “Well can you think of two women cooking, in one day, 2,500 doughnuts, eight dozen cupcakes, fifty pies, 800 pan cakes and 255 gallons of cocoa, and one other girl serving it. That is a day’s work.” Despite the Salvation Army sending only 250 volunteers to the front in Europe, the group and their “Doughnut Lassies” had an outsized positive impact on the soldiers’ psyche. 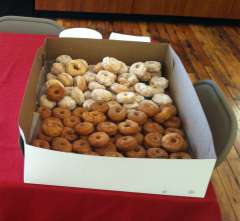 Suitable for all ages, with supervision for cooking.

Recipe for Salvation Army doughnuts to be made by students or made for them, depending on age.

Put flour in shallow pan, add salt, baking powder, and sugar. Rub in butter with fingertips. Add the well beaten egg and milk and stir thoroughly. Toss on floured board, roll to one-fourth inch in thickness, shape, fry, and drain. Mix the cinnamon and nutmeg with fine granulated or icing sugar and use to dust the doughnuts after cooking. Makes approximately 15 - 20 doughnuts.

Now, how did they create these doughnuts cooking in crude field kitchens? That’s a tough question. They improvised and created homemade doughnut cutters from used and cleaned tin cans, used empty wine bottles in lieu of rolling pins and even fried the doughnuts in steel helmets!

As an expanded activity, with close supervision, the students can improvise these tools or use improvised tools rather than regular kitchen equipment to make the doughnuts.

Discussion Point for the students:

Ask yourselves: “If I were a doughboy, would I have stood in line for hours to get a hot, fresh doughnut and cup of coffee and talk to a real American girl, even for only a few seconds?”

2. Women in the Service Discussion

Suitable for 7th grade and older.

After reading about the contributions of women in World War I, ask the students to discuss the limitations placed on women during that time. Have things changed today? If the students have read about American Indian and African-American contributions to the Great War, ask them to compare and contrast those with the experiences of women. Were they treated similarly or differently? How? Discuss each of the groups of women mentioned—Army Corps Nurses, Red Cross nurses, Hello Girls, Yeomanettes, Doughnut Dollies, etc. Why was each group of women so important?

Suitable for 2nd through 6th grade.

Divide class into 5 - 7 Hello Girls, and let the rest be soldiers. Give each soldier a tin can connected to a Hello Girl. Now the soldiers of the class will try to “call” other soldiers, but each call must go through a Hello Girl. The Hello Girl student will pick up the tin can of the soldier calling and hand it to the correct soldier on the receiving end. With all of the soldier students trying to call one another through the Hello Girls, it should create a bit of pandemonium and illustrate to the students how difficult this job was--especially when critical orders were being sent through the phone lines. This game could be modified with time limits so that the operators and soldiers only have so many seconds to connect each call.