Area 12: The U.S. During the Struggle for Civil Rights
Question: How successful was the U.S. in creating a more equitable society?

Click here to see a spreadsheet aligning Wyoming State Social Studies and Common Core Standards for this and other digital toolkits of Wyoming History.

Treaty with the Crow tribe, signed at Fort Laramie, 1868
https://indianlaw.mt.gov/Portals/127/crow/treaties/1868_treaty.pdf

Map of Crow and other tribal lands in Montana, 1851 and today
http://www.montana.edu/iefa/introductiontomttribalnations/tribalterritories.html

Video of ceremonies for 150th anniversary of Sho-Ban treaty
https://www.facebook.com/ShoBanNews/videos/fort-bridger-treaty-day-sunrise-ceremony/275957020289645/

Reading:
Summary of WyoHistory.org article on two U.S. Supreme Court cases involving rights of the Bannock and Crow tribes to hunt in Wyoming.

WyoHistory.org article , Who gets to hunt Wyoming's elk? Tribal Hunting Rights, U.S. Law and the Bannock 'War' of 1895. 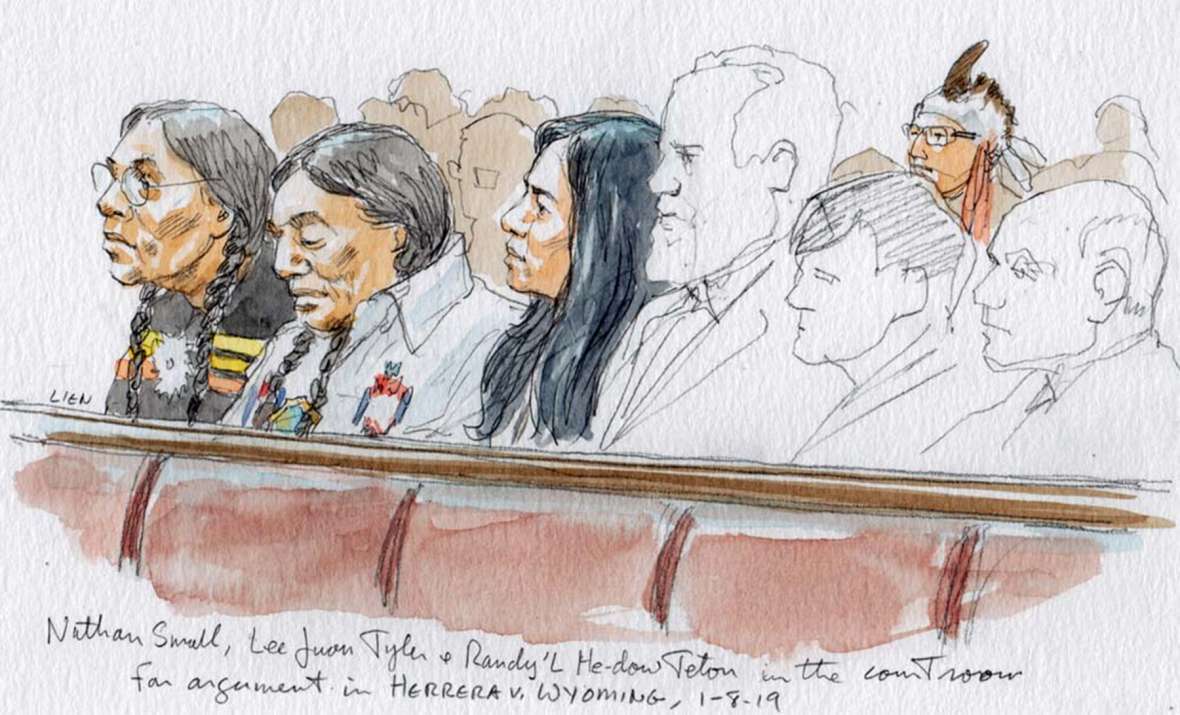 Introduction
Doorbell questions: Students will discuss what ownership means to them. What is a treaty? What does it mean to own land? Should land ownership include rights to hunt on that land? By the late 1800s, with more and more settlers looking for homesteads, game was becoming more difficult to locate and this put more pressure on the tribes to go farther out for food sources.

Day one, Treaties and maps.

Closure
As time permits, students will watch the video of ceremonies at the Fort Hall Reservation in 2018, on the 150th anniversary of the 1868 treaty. Why do treaties matter today?

In the summer of 1895, a small party of people from the Bannock tribe left their reservation at Fort Hall, Idaho, to hunt elk in Wyoming near Jackson Hole. They had always hunted elk there, and their treaty with the U.S. government clearly permitted them to do so. Once in Wyoming, however, they were arrested by a posse of 27 men intent on enforcing new Wyoming game laws. After the arrest, the Bannocks became convinced the white men were about to kill them, and fled. One old man and an infant were killed. The rest of the Bannocks returned safely to their Idaho reservation.

That might have been the end of it, but officials in the U.S. Indian Bureau in Washington, D.C., were convinced the Bannocks were within their hunting rights, according to their treaty, and decided to make a test case of it. John Race Horse, a Bannock man who had hunted elk earlier in Wyoming, agreed to be part of the test. He returned to Wyoming, was arrested, and his case went all the way to the U.S. Supreme Court. The legal case is called Race Horse v. Ward.

The treaty that the Eastern Shoshones and the Bannocks had signed at Fort Bridger in 1868, and the treaty the Crow Tribe signed at Fort Laramie in 1868, both guaranteed that the tribes “shall have the right to hunt on the unoccupied lands of the United States so long as game may be found thereon, and so long as peace subsists among the whites and Indians on the borders of the hunting districts.”

The Supreme Court ruled that, when Wyoming was a territory, it had been obliged to follow all Indian treaties. But now that Wyoming, since 1890, was a state, it deserved to have its laws enforceable on an “equal footing” with every other state—even states where Indian reservations were not an issue. It meant that state law overrode federal treaty law. It was a huge blow to Indian sovereignty.

But that’s not the end of the story. In January 2014, Clayvin Herrera, his brother and a friend, all members of the Crow Nation, a Montana tribe whose reservation borders Wyoming, killed three elk inside Wyoming on the Bighorn National Forest. They were charged in Wyoming with killing elk out of season and without a license. The other two men pleaded guilty to lesser charges but Herrera, like Race Horse, was ready for  a test case. Herrera v. Wyoming also went all the way to the U.S. Supreme Court.

It was a much more complicated case, involving not just the original Race Horse case but two others decided much more recently in ways that seemed to conflict with each other. In the end, however, the court backed away from the old idea that state law overrode federal treaty law, and overturned Race Horse. Lots of details about game management and hunting rights remain to be worked out between Wyoming and the Crows, and some of those questions are back in court. But we can hope all the issues can now be resolved, justly, for all.

For the full story, read “Who Gets to Hunt Wyoming’s Elk? Tribal Hunting Rights, U.S. Law and the Bannock ‘War’ of 1895.”