Fort Halleck and Conflict on the Overland Trail

Fort Halleck and Conflict on the Overland Trail

Area 4: The United States During the Civil War (1850s-1860s)
Guiding Question: How did the Civil War fundamentally alter the nation? 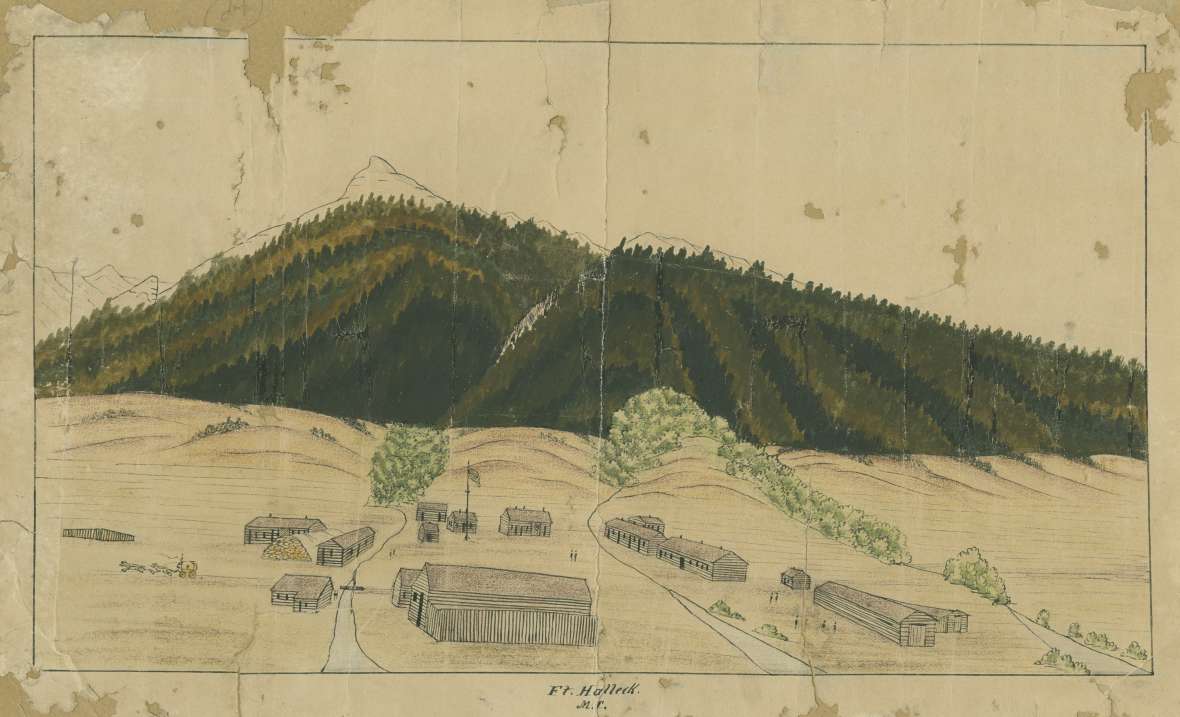 The exercise asks students, after reading the topic summary, to study a map of stage stations on the Overland Trail and then read a report from Lt. James A. Brown of the Eleventh Ohio Cavalry, Company K, written to his superior officer about an expedition he led to defend the stagecoach stations west of Fort Halleck.

Have students read the topic summary, below.

Have students study the map carefully, below. Wyoming was not yet a territory or state in 1865. The state borders here are modern. Ask them to find Fort Halleck on the map.

Ask students to read Lt. Brown’s report to his commanding officer, linked below.

Divide the class into small groups. Ask half the groups to do the first activity, and the other half to do the second activity. At the end of the class, ask students from opposite groups to compare their conclusions.

Activity 1: Make a list of all the stagecoach stations Brown refers to in his report. Now find them on the map. Next, list as accurately as you can the number of soldiers left alive and also those left alive but wounded at each station, according to Brown’s report. This will tell you how many able-bodied fighting men were available after the battles.

In view of the fact that Brown had to leave some men at each station to defend it, and that these stations were from about three to 30 miles apart, either as a group or individually draft an additional 250-word report as though you were Lt. Brown. Explain why you took only 31 men with you.

Activity 2: Imagine you are a young Cheyenne person who survived the troops’ attack on the village on Sand Creek seven months earlier. It’s now June 1865. Your older brother, who is 17, has ridden off with his friends and cousins to attack the stage stations. Was that a good idea? For him? For you? For your parents and grandparents? Write a 250-word essay explaining why it was or wasn’t.

Was it realistic to expect 31 men to defend more than 50 miles of trail west of Fort Halleck? Why or why not?

The U.S. Army built Fort Halleck near the north end of Elk Mountain in present south central Wyoming, in July 1862. Its purpose was to guard the Overland Trail, which came north from Colorado Territory and then ran roughly parallel to but 10 to 20 miles south of present Interstate 80. Fort Halleck was the only military post in the 350 miles between La Porte, near present Fort Collins, Colo., and Fort Bridger in the southwestern corner of what’s now Wyoming. There was no railroad yet, and all transportation depended on horses, mules and oxen.

Traffic on the Overland Trail included emigrant wagon trains, freighters and stagecoaches. The stagecoach line offered daily passenger and mail service from points east to Salt Lake City and beyond. Stagecoach businessman Ben Holladay built about 17 stations on the route through present Wyoming, some for changing to fresh horses and others for passengers’ food and lodging.

These stations, their mules, cattle and horses and the wagons, cargo and livestock of freighters and emigrants were all tempting targets for Native warriors. Lt. Brown in his report refers to them only as “Indians.” Probably they were Cheyenne, Arapaho or Lakota Sioux.

The Army, trying to fight the Civil War, had to recruit men for both the Union Army and defense of the western trails. These included the Oregon Trail, where the new transcontinental telegraph was running, and which the Indians kept cutting, as well as the Overland Trail, a newer, slightly shorter route more often used by commercial travelers . (See map.)

Army garrisons were nearly always too small for the jobs they were expected to do. In June 1865, two officers and about 75 men were garrisoned at Fort Halleck.

Tensions between the tribes on one side and the Army and white freighters and travelers on the other were especially high that summer. Only seven months earlier, troops had attacked a peaceful village of Cheyenne and Arapaho on Sand Creek in southeastern Colorado Territory, killing at least 135 people and mutilating their bodies. Lakota and Cheyenne had gathered afterward in large numbers in the Powder River country of what’s now northern Wyoming, and all that spring and summer had been moving south to raid Army and civilian travelers and stage stations along the trails.

At the same time, under heavy pressure from white hunters, the buffalo were fast disappearing from the plains. The tribes needed more and better horses to hunt them—further incentives for warriors to raid stage stations for their livestock.

In spring, summer and early fall, when the warriors increased their raids, soldiers regularly traveled east or west from Fort Halleck to defend a stage station or sometimes to warn an emigrant train. Once, when the number of men at Fort Halleck was greatly reduced by these travels, Army officials required members of a passing wagon train to stay at the fort to help defend it until the soldiers returned.

Four years after it was built, Fort Halleck was decommissioned, on July 4, 1866.