Area 6:  Westward Expansion and the United States (1840s-1890s)
Question:  How did expanding westward affect tensions within different regions of the U.S.?

Resource 2: Article
“John Campbell and the Invention of Wyoming” 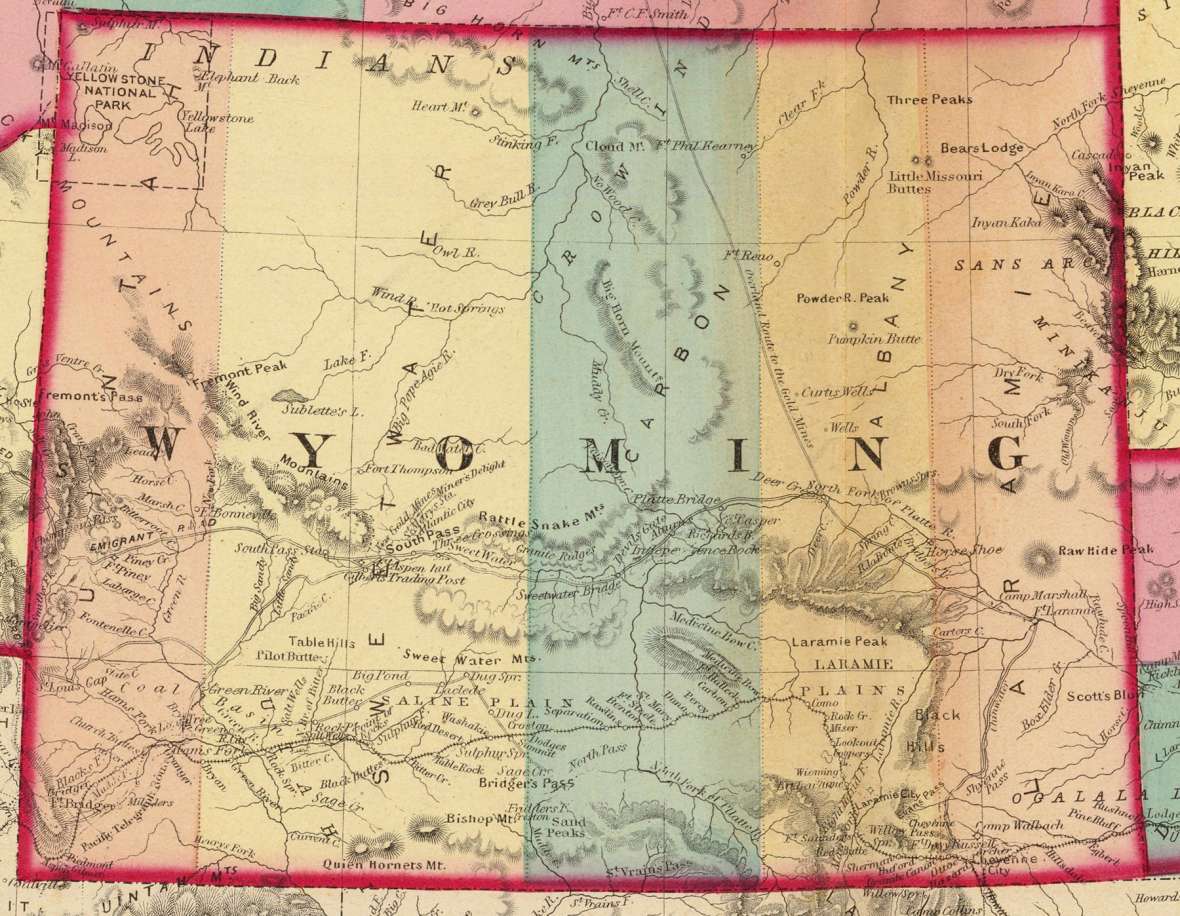 Introduction
The exercise asks students, after reading the summary and the longer article, to read part of Gov. Campbell’s message to the first Territorial Legislature, and to list what Campbell accomplished in his first seven months in office, also evaluating his effectiveness during this time.

Plan
Read four short sections of Gov. John A. Campbell’s message to the first Territorial Legislature, starting on page 0 through part of page 1 (thumbnails): Territorial Organization, Census, Election and Appointments. He gave this speech shortly after the legislature assembled for the first time in October 1869. By then he had been in the territory for five months. The Wyoming State Archives typescript may seem faint at first, and you may want to enlarge it to make it easier to read. Click on the lower right icons to view a single page, or two pages at a time; near the upper right, click on the magnifying glass icon with the plus sign to enlarge the page view.

Once you’ve read the four sections, make a list of what Campbell reports that he accomplished from May 1869, when he arrived, to October 1869, when the legislature met.

Write a short essay of 250-300 words, answering the following questions: Do you think Campbell accomplished a significant amount during his first five months in office? Part of his job was to run the territory, tax the citizens so the territory had money to operate and see that the laws were enforced; do you think he made a good beginning on these responsibilities? Why or why not? Use your list and the text of Campbell’s message to explain or defend your answer.

Why did almost a year pass between the establishment of Wyoming Territory and the appointment of its officers?

Resource 1: Topic Summary
Congress established Wyoming Territory in summer 1868 but refused to approve any of President Andrew Johnson’s appointments to run it, as the lawmakers were locked in struggle with the president and were impeaching him at the time. The stalemate broke after President Ulysses S. Grant was elected that fall. In spring 1869 Grant appointed seven territorial officers for the territory, including Gov. John A. Campbell. On May 7, 1869, the new officers stepped off the train in Cheyenne, at the southeastern corner of a territory that had very little real government until they arrived. Now, courts could be set up and the law systematically enforced.

Campbell had to get to know the people he had been sent to govern, and also organize elections for the new territory’s legislature. To do the latter, he had to establish counties. The locations of towns along the Union Pacific Railroad in southern Wyoming determined the number and shape of the counties. See the map on this page for more details.

Along with the federal government, the railroad was the territory’s major employer. Sometimes railroad officials acted as though they had a right to control politics in the territory, including deciding who Wyoming’s territorial delegate to Congress should be. Fortunately, Campbell told them they couldn’t do that.

In 1871 Campbell made another important decision, when the second territorial legislature tried to repeal the law made by the first legislature two years before, allowing Wyoming women to vote. Both houses of the legislature passed the bill that would have taken away this right, but Campbell vetoed it. The legislature fell one vote short of overriding his veto.

Campbell was reappointed in 1874, but resigned in 1875 to take a job in the U.S. State Department. Wyoming had eight territorial governors in all.

Resource 2: Article
The article, “John Campbell and the Invention of Wyoming” offers substantial background on the topic for teachers and for students 8th grade and up. The article may be demanding for 6th and 7th graders.

The 1872 map of Wyoming Territory is from Wikipedia. Used with thanks.

John Campbell and the Invention of Wyoming