Comparing the Wyoming and U.S. Constitutions

Comparing the Wyoming and U.S. Constitutions

Area 1: Foundations of the United States (1700-1800)
Question: How do our constitutions as living documents represent “we the people”?

When, in 1889, delegates from across Wyoming Territory set about writing a constitution for the new state of Wyoming, the U.S. Constitution was their a primary model.

The delegates were in a hurry. They had been chosen in a special election called by Territorial Governor Francis E. Warren. He knew that if they could produce a document quickly, it would put more pressure on Congress to admit Wyoming as a new state. The delegates met in Cheyenne and in just 25 days assembled the document. Warren’s tactic proved effective. Wyoming became a state the following year.

The Wyoming and U.S. constitutions, drawn up 100 years apart in very different times, are in many ways quite different from each other. This exercise is meant to help students explore similarities and differences in the intentions, form and origins of the two documents.

Wyoming’s constitution was a cut-and-paste job for the most part. Washington, Montana and the Dakotas were all admitted to the union in 1889; their constitutions and Wyoming’s include much of the same language. Like these other states, Wyoming depends on its constitution as a framework under which the legislative, judicial and executive branches conduct their business.

The most notable difference between Wyoming’s and the U.S. Constitution is length. At nearly 30,000 words long the Wyoming Constitution is more than six times the length of the document that founded the United States 100 years earlier.

After a brief preamble, the Wyoming Constitution begins with Article I, a Declaration of Rights in 39 sections, the last of which makes clear that “the State of Wyoming is an inseparable part of the federal union, and the constitution of the United States is the supreme law of the land.” Article I contains language and ideas from many of then-existing fifteen amendments of the U.S. Constitution. It codifies rights that had not been specifically reserved to individuals in the national document. Among these are statements that “all power is inherent in the people” and that “all members of the human race are equal . . .in their inherent right to life, liberty and the pursuit of happiness.”

Some of those sentiments may have carried over into Article VI, Section 1, protecting women’s rights to vote and hold office, as had been the law in Wyoming Territory since 1869. The provision caused controversy when the Wyoming statehood question came before Congress in 1890, but was allowed to stand. Women would not win the vote nationwide for 30 more years. Similar ideas of equality account in part for Wyoming’s provision that the state would own all water within its borders, and allocate it to landowners for beneficial use.

Further, the state constitution sets up an executive branch structure quite different from the national one. Where the president and vice-president are the only two executive officers elected nationwide, Article IV, Section 11 of Wyoming’s constitution provides that the governor and four other officers—secretary of state, treasurer, auditor and superintendent of public instruction—all be elected statewide. And many important decisions—on state lands, the investment of state funds, the running of the state’s penal institutions and much more—must be agreed on among the five. The structure reduces and diffuses the power of the governor compared to most states.

Differences and similarities like these offer a treasure trove of materials from which to explore the question, “how do our constitutions as living documents represent ‘we the people.”

Like the United States Constitution how does the Wyoming Constitution represent Wyoming citizens and in what ways is it responsive to social and cultural changes over time?

The article linked below, “Wyoming Becomes a State,” offers substantial background on the topic for teachers and for students 8th grade and up. It may be demanding for 6th and 7th graders. 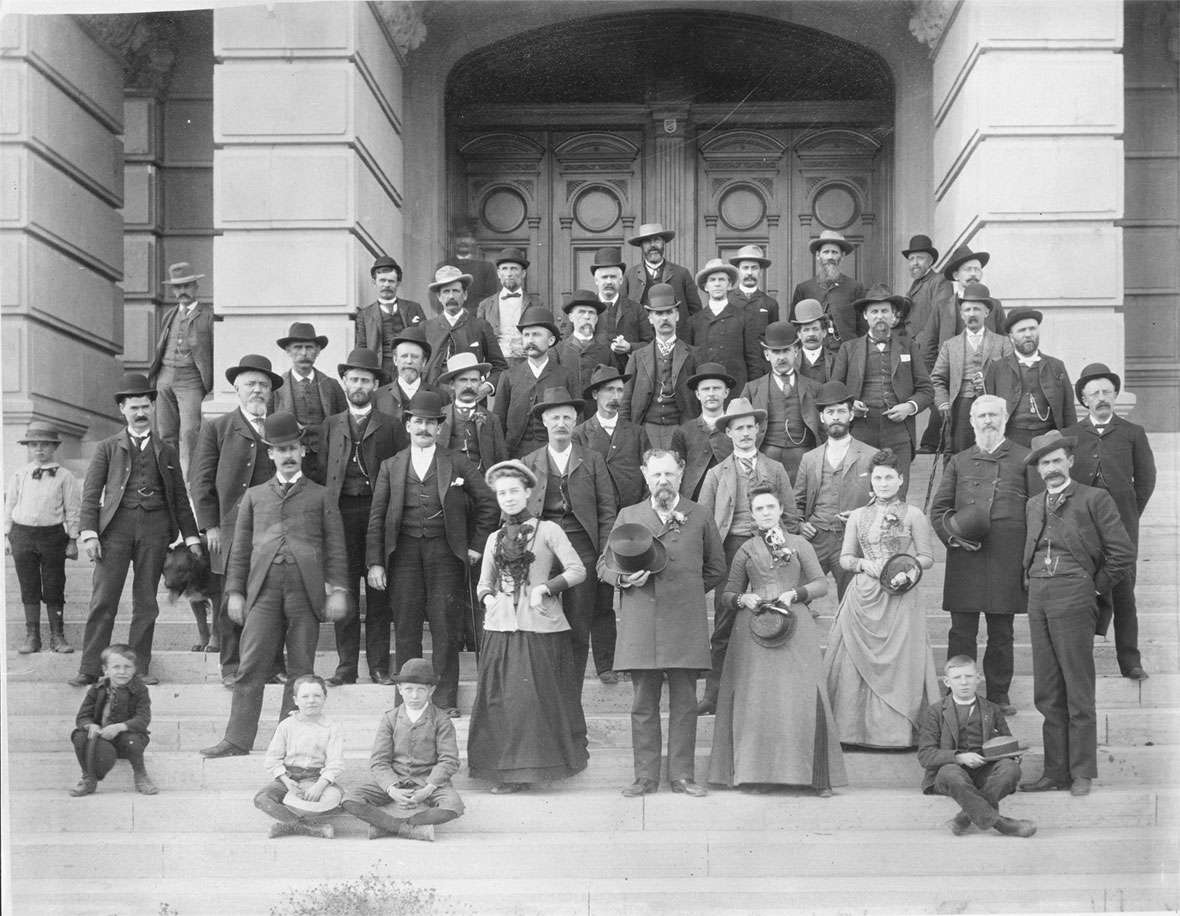 2. At https://soswy.state.wy.us/Forms/Publications/09WYConstitution.pdf, carefully read the Preamble and all 39 sections of Article 1, Declaration of Rights to the Wyoming Constitution.

3. Write a brief essay that addresses the questions: How are these portions of the U.S. and Wyoming constitutions similar? How are they different? Use examples from the texts to defend or explain your answer.

Wyoming Becomes a State: The Constitutional Convention and Statehood Debates of 1889 and 1890 and Their Aftermath