Many of us remember Wyoming’s smoky skies in the summer of 1988, when Yellowstone was ablaze. The fires started in June; at first they were small and isolated. Yellowstone National Park officials followed a hands-off fire policy that had been in place for 16 years. 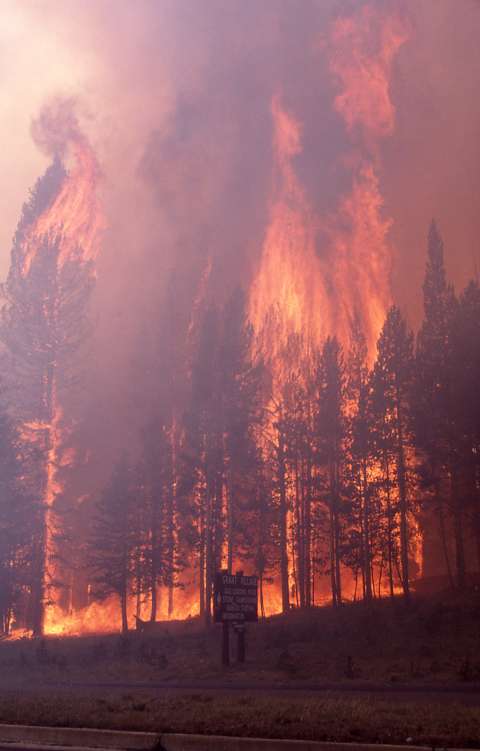 But after a wet spring, boosting growth of brush and underbrush, 1988 was the park’s driest summer recorded up to that time. However, by mid-July, only around 8,500 acres had burned. Then the fires doubled in size in a week. Park officials reversed their policy and began fighting all the fires.

By mid-August it was so smoky that residents 300 miles away in Casper, for example, remember days when nearby Casper Mountain was invisible from town. National controversy erupted around the park’s policies that had led it to refrain from dousing the early fires. Local and Western news outlets, both print and broadcast, generally covered the story better than outlets based in the East, some of which were reporting as late as September that officials were continuing to allow the fires to burn, which was not true.

Before a quarter inch of snow finally fell September 11, more than 680,000 of the park’s 2.2 million acres had burned together with more than 500,000 outside the park, for a total of 1.2 million acres in the greater Yellowstone area.

The disaster seemed enormous at the time. “But climate studies indicate that large fires will probably become more frequent,” longtime environmental reporter Dan Whipple wrote in WyoHistory.org’s 2015 article on the Yellowstone fires. “The lessons from Yellowstone in 1988 should inform decisions about this coming whirlwind.”

Well, now the whirlwind is here. As of this writing, 5 million acres have been blackened this summer of 2020 in 12 western states, including at least 3.2 million in California, 1 million in Oregon and half a million in Washington. That total is more than four times the 1988 acreage burned in the Yellowstone area. At least 35 people have died in our three west-coast states, tens of thousands of people have been evacuated and hundreds of homes and thousands of other structures are gone.

Smoke from the west-coast fires is regularly hazing the skies in Wyoming and has drifted all the way to Washington, D.C. And extremely severe drought, meanwhile, continues to stalk Wyoming and the West.

See “Climate change and forest management have both fueled today’s epic Western wildfires,” by Steven C. Beda, assistant professor of history at the University of Oregon.