When I agreed to provide WyoHistory.org with some notes introducing my recent article about Wyoming reactions to the death of Martin Luther King, it occurred to me to look again at the University of Wyoming student newspaper, the Branding Iron. In the April 19, 1968, issue, from two weeks after the assassination, I found a letter to the editor and poem, both by student Ken Cooper.

This paean about Dr. King joining “the ranks of fallen men of peace” seemed so heartfelt, coming from such deep sorrow and pain, that I wondered whether the author was one of UW’s few African-American students in the late sixties. My name also appears in the Branding Iron masthead on that page, listing me as sports editor. I knew the names of many of UW’s Black athletes at the time, but I didn’t recognize this name then or now, 52 years later.

So I took a shot at finding something about this Ken Cooper. I checked the UW alumni directories without success. Then I searched for his name on Facebook and turned up a 72-year-old person with that name living in Laughlin, Nev. who ran track at the University of Wyoming. Truepeoplesearch.com gave me some possible phone numbers. I left messages on two of them, and within an hour I was talking to this remarkable man and he was mentioning the names of many sixties students and athletes I knew or recognized.

Cooper was born in Virginia and raised by his maternal grandparents there until age 12. Earlier, when he was about 6, he had accepted his aunt’s suggestion that he pay 25 cents in dues and join her as a member of the NAACP. He began reading that organization’s newsletter, The Crisis, and was horrified about the maiming and lynching of 14-year-old Emmett Till of Chicago while visiting in Mississippi in 1955.

By 1959, Cooper’s mother had married his father, a musician in Harlem, and they had moved to Los Angeles. Ken joined them and a younger brother there. He developed a lifelong love of music from his father’s influence, becoming proficient on clarinet, flute and saxophone, and at the same time made himself into a powerful sprinter in track. That is what brought him to Wyoming. As a senior he had sent letters of interest to track coaches in the West and received offers from colleges in Montana and the Dakotas, but his father encouraged him to accept the offer from UW coach John Walker because UW was in the Western Athletic Conference.

After graduating high school, Cooper wanted to hone his speed at high altitude and wound up working for a restaurant in Cody. At UW in September he soon met two other Black sprinters, Araby Jones from Cheyenne, his roommate in McIntyre Hall, and John Mapp of Casper, along with Dwight James, another African-American from Cheyenne who was his floor proctor in the dorm and who became a valued mentor. Cooper was elected to the Residence Hall Council and developed a fund-raising project of bringing in movies to show in Washakie Center.

After practice on April 4th, 1968, Cooper and Jones went to dinner and learned of the murder of Martin Luther King in Memphis. They were so shocked and angered they went down the hall of their dorm floor and banged on every door, crying out in protest. Then Cooper sat down in his room and wrote his poem.

During an interview this week after reading his letter and poem for the first time in many years, he recalled that his reference to “three brothers” of peace was to Christ, MLK and Medgar Evers, a WWII Army vet who became an NAACP activist and was murdered in front of his Jackson, Miss., home in 1963 by a member of the White Citizens’ Council.

He also recalled a response to his poem published reluctantly by the Branding Iron editors a week later. It was a letter from Andrew David Louis, a junior in secondary education who identified himself as being associated as “Lieutenant-Colonel” with Gov. Lester Maddox of Georgia who had closed his restaurant business because he refused to follow the law and allow blacks equal access.

Louis said in his letter: “I for one, do NOT revere the deceased Dr. King. I do not feel an ounce of pity for the man.” He said “the only answer to our national racial crisis is a system of Apartheid. This system has worked wonders for the people of South Africa.” An “Editor’s Note” following the letter said this proposal, “like your opinion, is ridiculous.”

After his time at UW Cooper attended Sheridan College. In the dorm there he once untied a student from Buffalo who was suspected of being gay and was tied to a bannister one day by other students. Another time he was threatened not to accept an invitation to a dance from a white student, but he refused to be intimidated, went to the dance and nothing happened.

Cooper finished his bachelor’s and master’s degrees in education in California and taught for several years before beginning a long career as a salesman for 3M Company.

Upon retirement to Laughlin he resurrected his passion for music and developed a second career as a solo entertainer playing his own instrumental and vocal “souljazz” numbers in clubs and producing some CDs. When performing live he introduces one song, “Man Ain’t Supposed To,” as being inspired by his year in Sheridan.

Look for “Kenneth ‘Brick’ Cooper” on YouTube, or see kbrickshow.com. 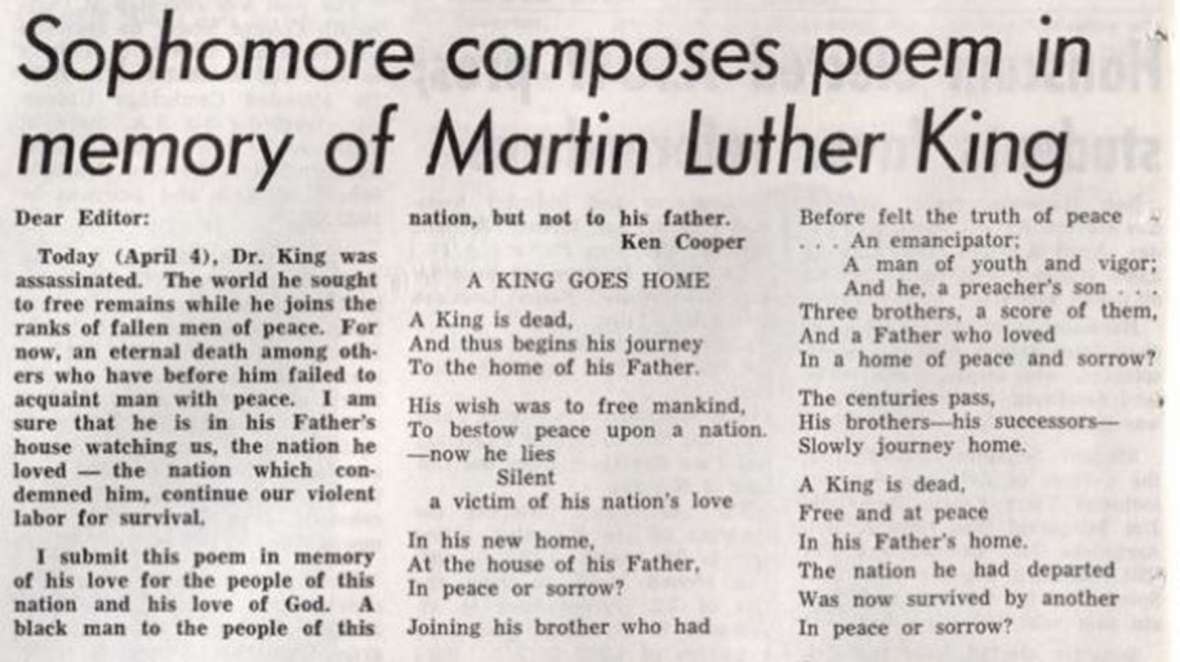